There are certainly many views on mice – vermin, pets, cartoon characters to name a few.  While they can be a menace, there must be something appealing about mice for them to have been made into so many fun, interesting even beautiful items.

When I was really little, there were little gray mice figurines in the gumball machine at the corner store.  I wanted one of those in the worst way, but I could never win one.  I found the one below later in my travels and to the best of my recollection, this is the type that were in the machine, but I am not positive.

My mouse collection started out with the real thing. In the mid – 1970’s, my friend Lee and I visited my sister.  She took us to K-mart, which at the time, had a pet department.  There, I purchased two mice – a black one (Pepper) and a white one (originally Salt, but changed to Vite).  I didn’t even get any permission – I just showed up at home with mice.  Being a collector, this turned into 5 mice.  One was a pretty, soft silvery gray – like a chinchilla.  Another was white with peachy tan patches and the fifth was white with black patches – funny, but I don’t remember their names.  I built a maze for them, complete with cheese at the finish.

Vite was by far the fastest at finishing the maze. 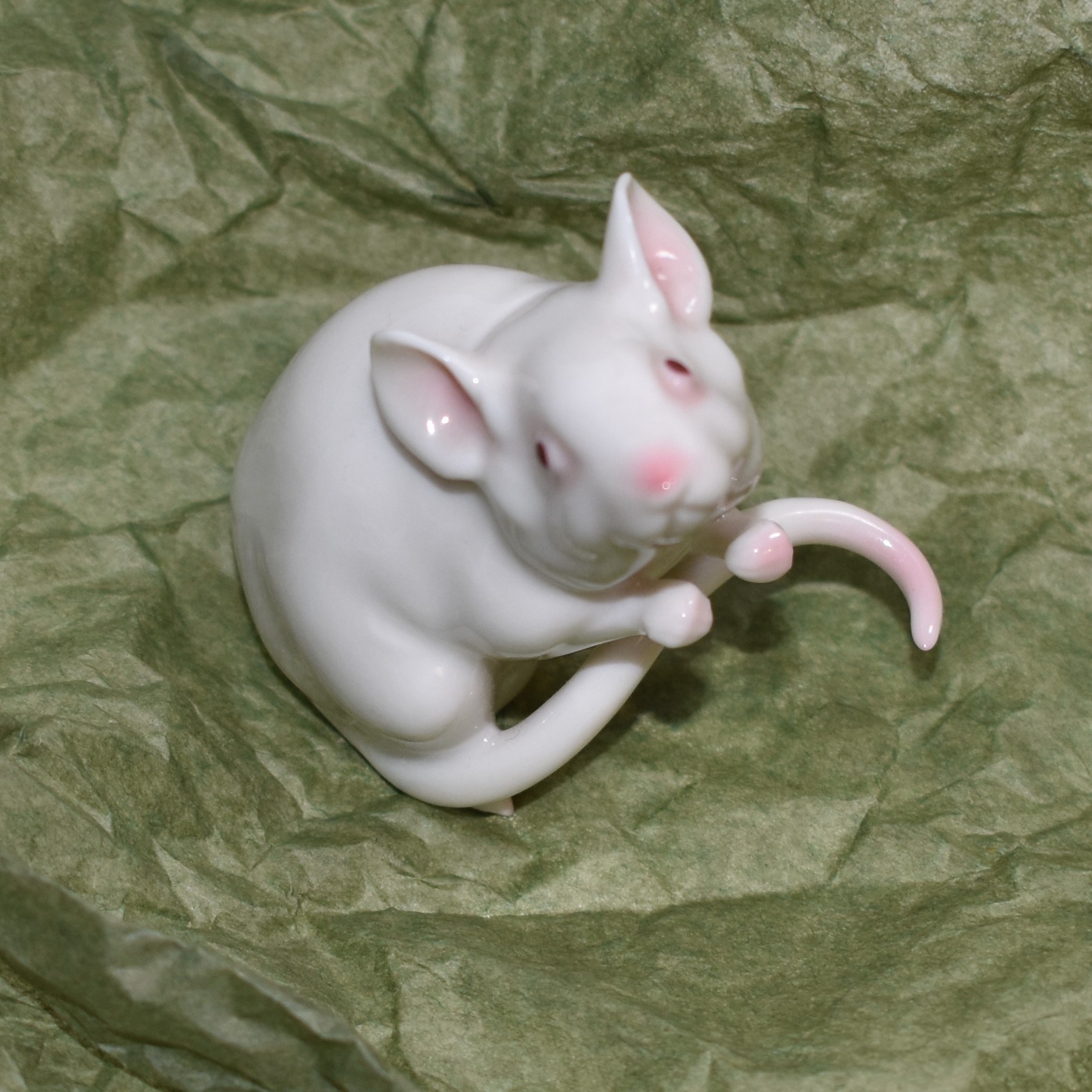 I never really minded mice – I get when they come in the house uninvited it’s a problem, but overall as creatures I think they’re basically cute.  When I was in college, instead of taking two extra pieces of public transportation home, sometimes I would walk from the elevated train.  The walk was about a mile or so, and part of it was past a large city park.  Some of my classes were late and one night there was a little baby field mouse running in the middle of the street, confused by the cars.  I picked him up and moved him to the side, but he ran out again.  At that point, I picked him up and put him in my art supply bag.

I know, it was dumb and probably gross – but I did it.

The little brown mouse got the full pet mouse treatment, and even though he was very young, he was never really tame.

He was nocturnal and was easily flustered by fancy food.  Once I put peanut butter in for him and he squeaked and sprung straight up nearly to the top of his enclosure. He loved to shred paper and cardboard items and lived a few years.  When he died, he was just tucked up in a little ball – I thought he was sleeping.

Of the mouse items I have, I think the pair of scatter pins may be what I’ve had the longest.  I got these on a long ago trip to Ocean City, NJ.  There used to be a great souvenir shop on the boardwalk called Irene’s.  You could always find a nice memento from your trip for not a lot of money.

Next I think is the mouse I made myself out of a shell (he used to have a tail made out of a painted piece of rubber band, but that was lost long ago).

The large crocheted mouse doorstop was crocheted by my sister – I think in the 1980’s.

The other mice have been added here and there and I still pick up mouse items that I find appealing.  I mostly lean toward small figurines due to space limitations and have a small section on the bookcase where I display most of the smaller mice.

A selection of cloth or fuzzy mice… 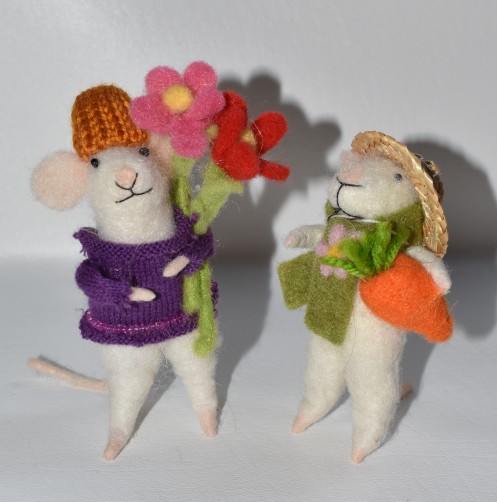 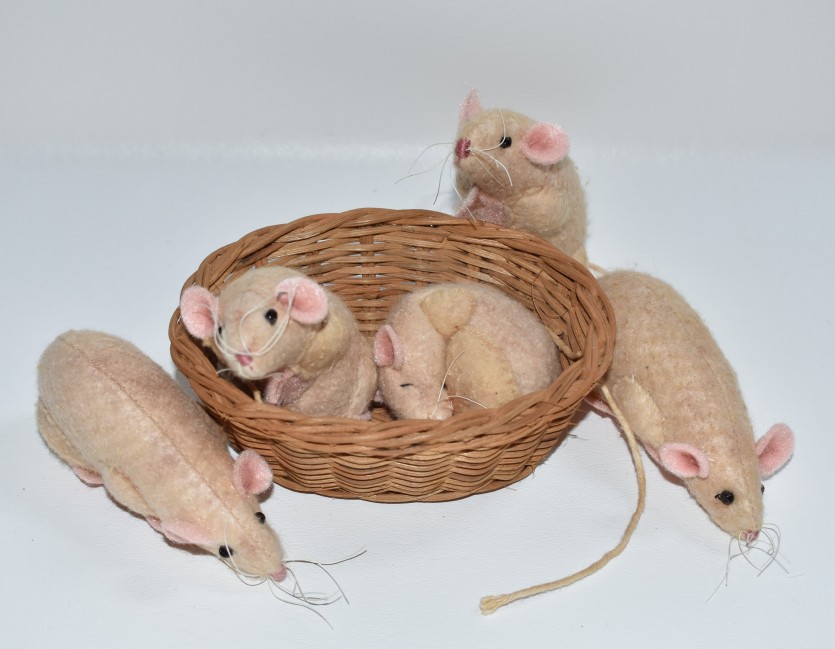 I also have a few mouse Christmas ornaments which were not handy at the moment…maybe I can add the pictures in a few months!  I’ve seen some really lovely porcelain mice by noted companies such as Herend, Lladro, Royal Copenhagen and many others.

Porcelain and pottery mice…hover over picture for details. 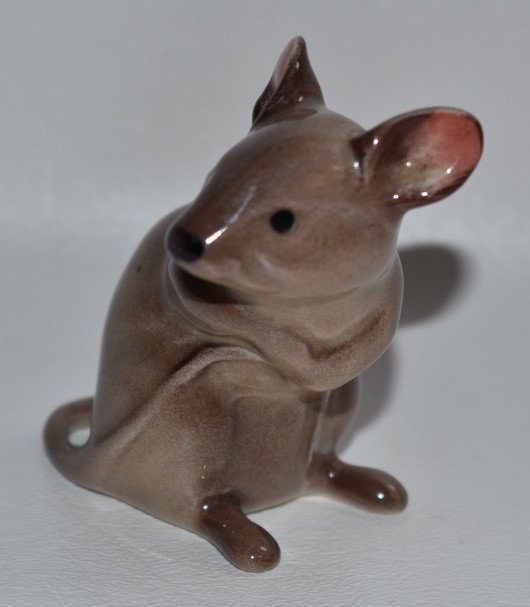 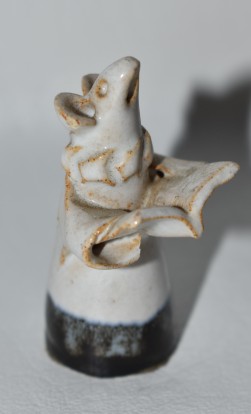 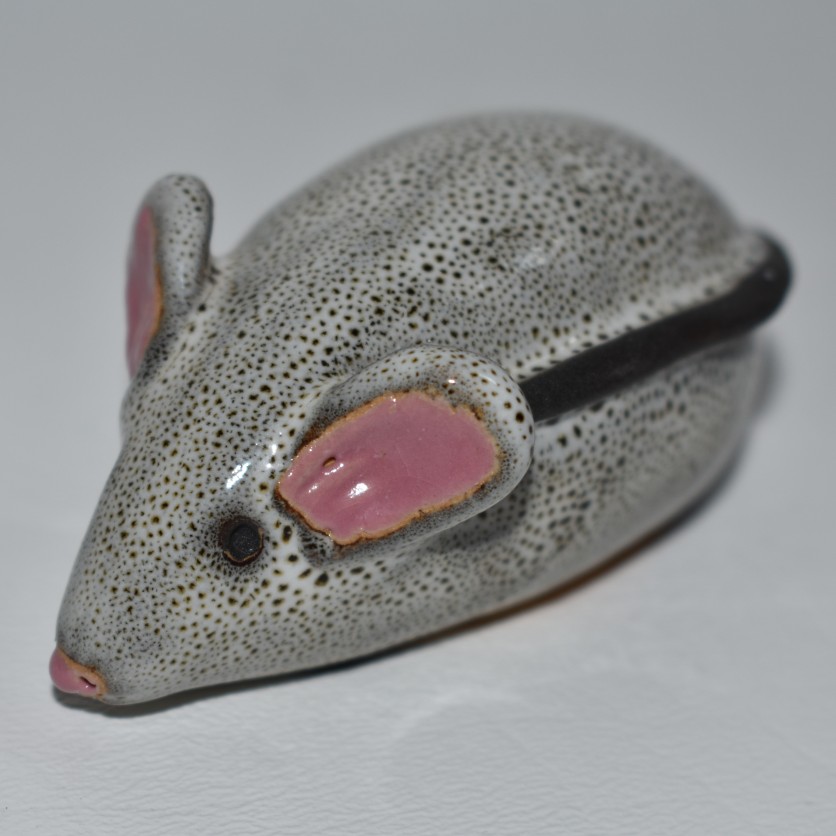 Josef porcelain mice…the kind I got when I was little.  They come in many forms and are easily found online.

A felted wool mouse made by an artist in the UK… 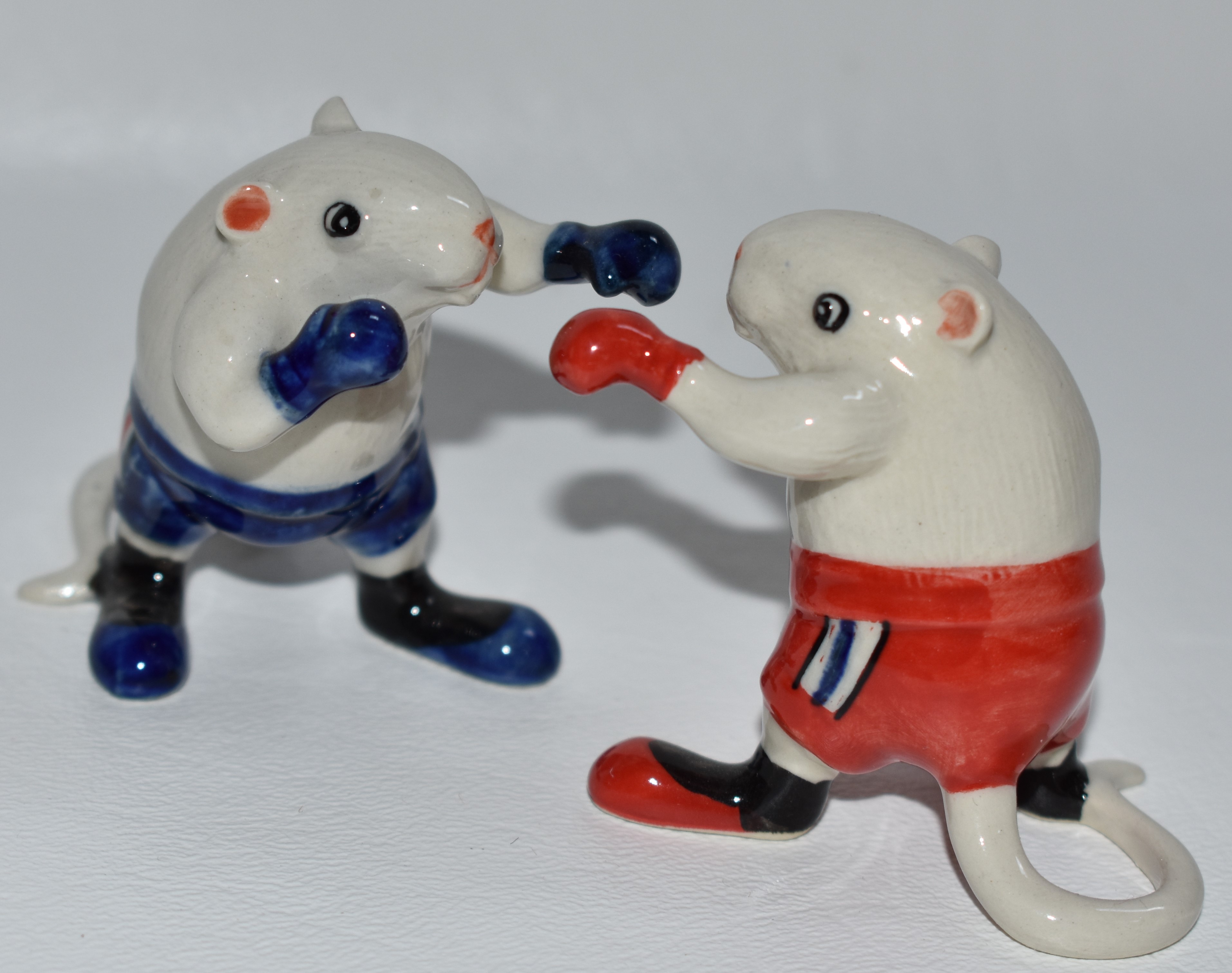 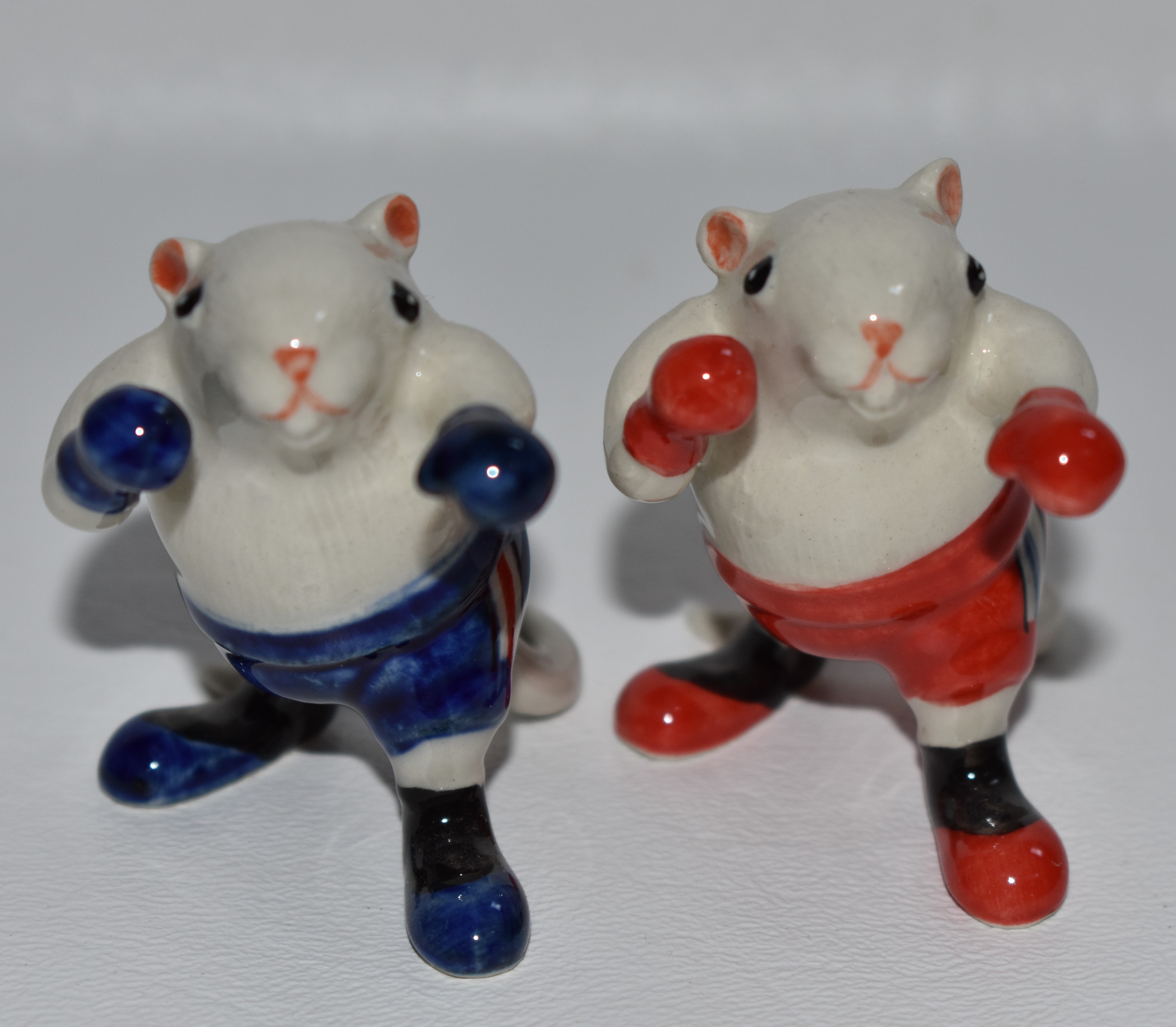 With just the examples that I have and all of those made by famous makers, there must be some redeeming qualities to mice, right?