With all the buzz around the British Royals lately, I thought it would be a fitting time to delve into the things I’ve collected relating to the royals.  Why I’m drawn to the British Monarchy, I can’t say.  I think originally it may have come from an interest in the Victorian era and discovering what that actually meant.  Queen Victoria had an incredibly long reign, however it was surpassed by her great-great granddaughter, Queen Elizabeth II who is now the longest-reigning British Monarch.  In addition to my interest in Queen Victoria, I also have an interest in Queen Elizabeth II.  She is so close in age to my Mom (they were born 6 months apart) and they witnessed all of the same historical events at the same age.  Naturally, their lives are completely different, but yet I think there are many similarities.  Both went from teens to young adults under the shadows and difficulties of WWII. I think this had a long lasting impact on how their lives would be shaped – forged with a serious sense of duty and keeping it together during hard times.

You could easily apply the British phrase “Keep Calm and Carry On” to my Mom’s approach to life!

My Mom, looking very much like a Queen – (photo courtesy of Celeste).

My “royal” collection is not as vast as some of my others, but none the less dear to me. Many facets mark the Victorian era – industry, culture, political change, etc. But looking at the Victorian Era from strictly a decorative point of view will show that it produced a treasure trove of designs. I love the clothing and jewelry from this timeframe.  I guess my first exposure was a trip to Cape May, NJ in 1976.

This place is like a time capsule…so many wonderfully preserved examples of Victorian architecture, full of “gingerbread” trim. I just liked the “feel” of the place and imaged what it would have been like in the late 1800’s. 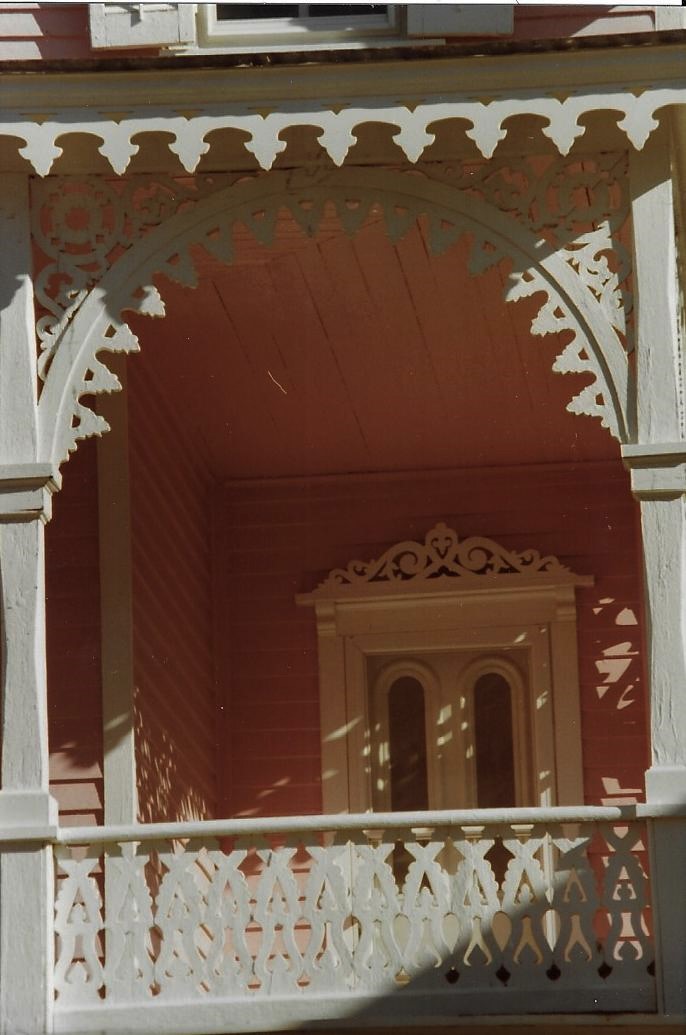 The gift shops had a lot of Victorian themed items and I began to get obsessed…no surprise.  I don’t even think I made the connection to an English Monarch…it was just the time period.  I don’t have any of my items that I got from my obsessed Victorian era anymore…the souvenirs from Cape May, but I do remember them.

A woven silk portrait of Queen Victoria, very early in her reign – circa 1840.  It is commonly called a Stevengraph, which was a term applied to similar woven silks made by Thomas Stevens in England, however this one has French markings.  I haven’t been able to find another like it.  The reverse is just like a photo negative. It is the same structure and feel as a satin ribbon, but the woven details are incredible. 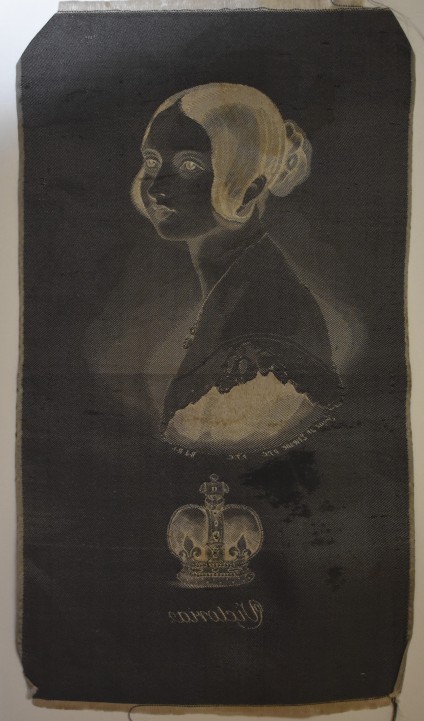 The two early engraved pictures below were actually in a box of old prints that my Mom once found “curbside”.  They aren’t in great condition, but they are very old.  One depicts and early portrait of Victoria and Albert, and the other shows views of their marriage  procession. 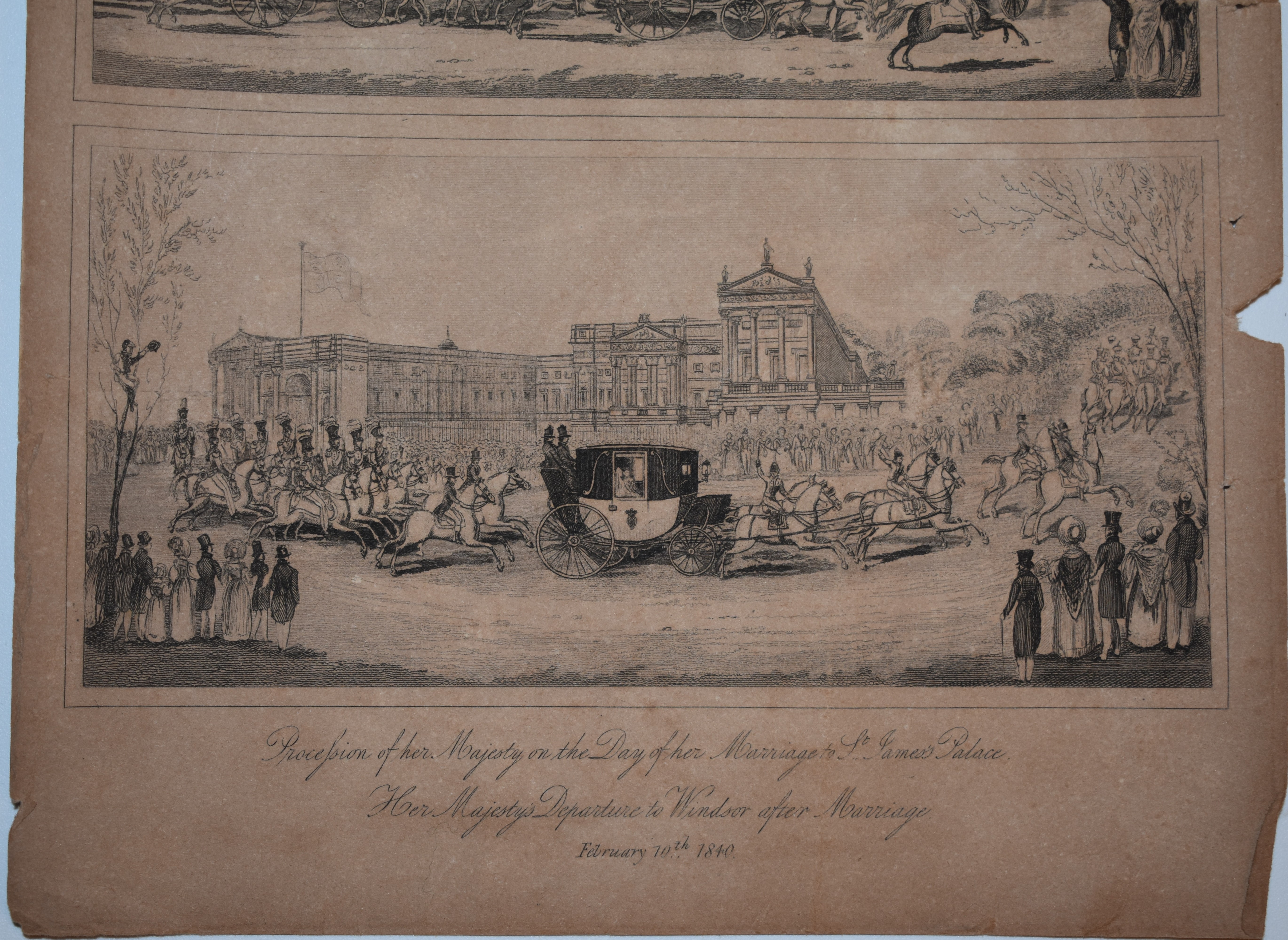 I got this very tiny medal online.  The person selling it stated it was given to people that attended Victoria during her coronation.  I’m not sure that it’s true but it is an interesting piece, and the dates correspond to her birth on May 24, 1819, and the coronation on June 28, 1838.

Next is a medal that was made to commemorate Queen Victoria’s 60 years of reign – 1837 to 1897.  She would continue to reign until her death in 1901.  It’s a nice looking medal with the ribbon still attached.

The poured wax baby is part of my doll collection and dates to around 1860. Victoria and Albert had nine children and they were naturally a great source of interest for the people in England.  It seems the fascination with the Royals is nothing new.  With all of the attention to the babies, several English doll makers started producing wax dolls in the likeness of the royal children – blond hair and blue eyes were a standard in the dolls. These were very high quality with hair individually inserted into the wax head with hot needles.  They had glass eyes and were elaborately dressed in multi-layered outfits of the finest materials.  They were obviously well cared for to be made of wax and still survive. 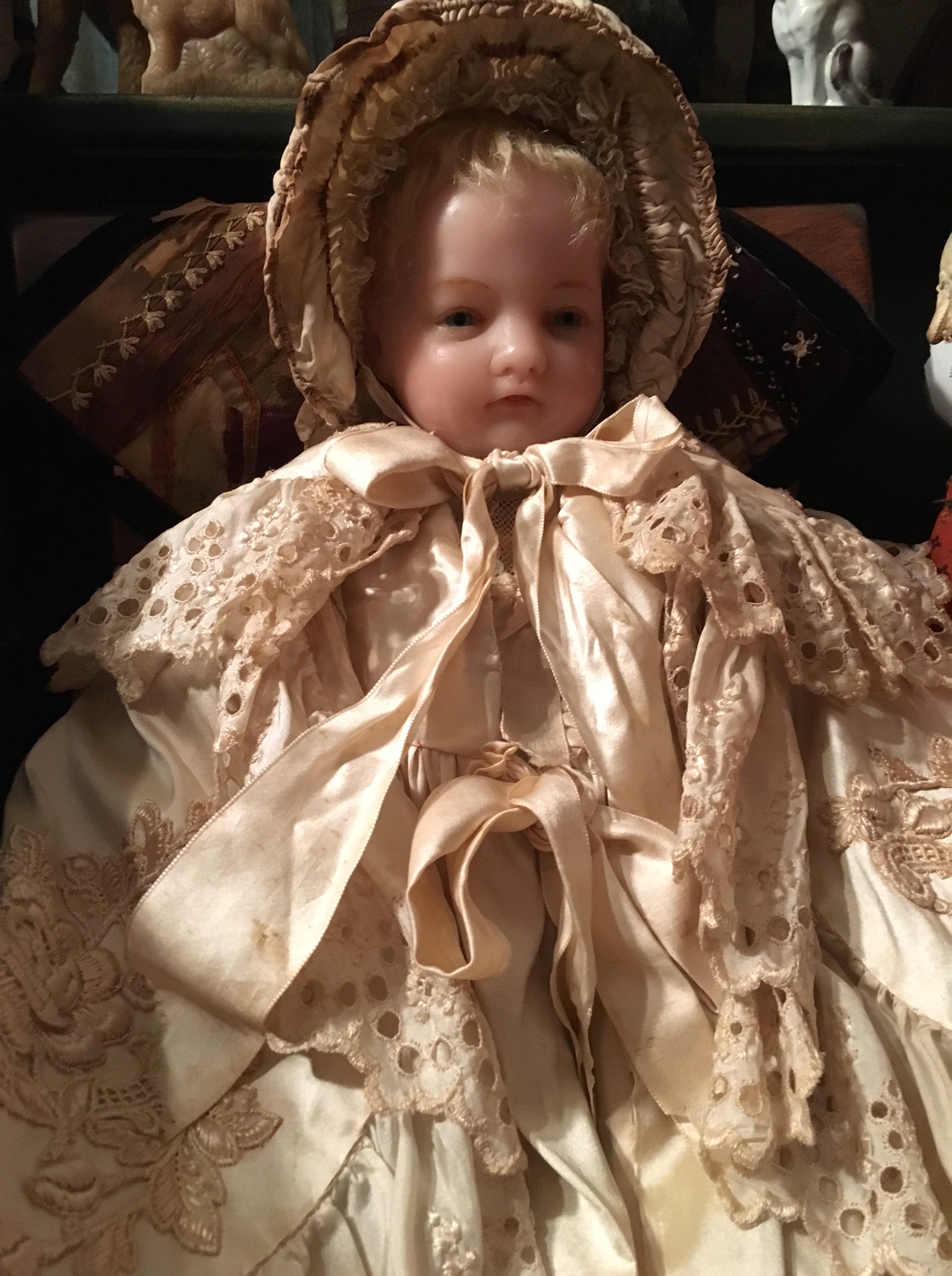 The bisque artist doll below, made for a doll convention is a portrait of the young Queen Victoria, holding one of her children. 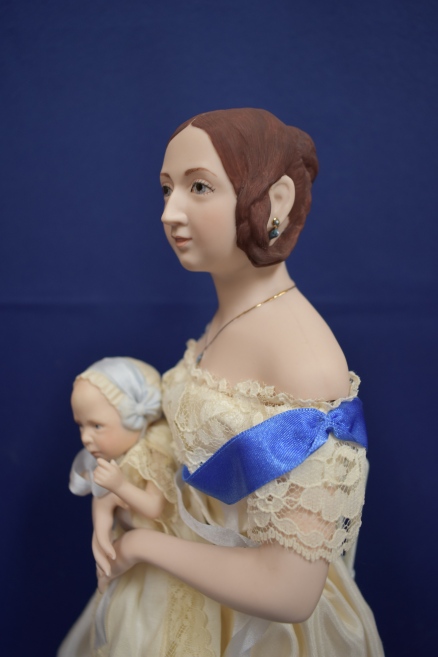 The last of my early pieces are not related to Victoria, but to Princess Charlotte Augusta of Wales.  One piece is a coin to commemorate her marriage to Prince Leopold on May, 2nd 1816.  The other is a large coin or medal commemorative piece made after she died during childbirth in 1817 at the age of 21.  She was the only child of George IV.  If she outlived her grandfather, George III and her father she would have been queen of England.  The prospect of her reign was seen as a positive and her death set off a tremendous period of mourning in England. 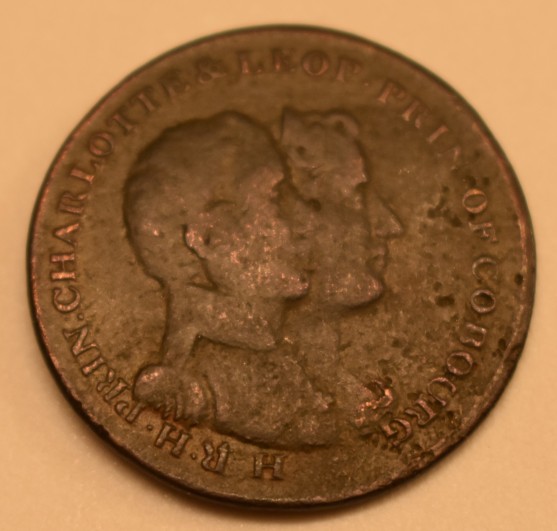 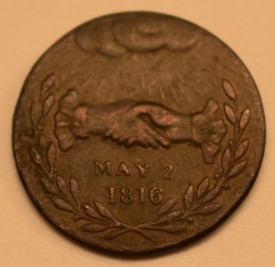 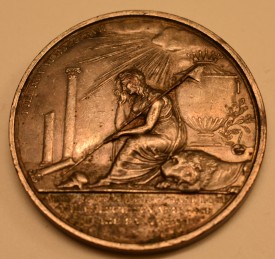 The next group of items that I have are related to the current monarch, Elizabeth II mostly when she was still a princess, along with her sister Margaret Rose.  By all accounts, Elizabeth and Margaret Rose enjoyed a normal childhood – that is as normal as could be expected for a member of the royalty.  They seemed to have a nice, fairly quiet family life.  However that was to change when her uncle, King Edward VIII abdicated the throne in 1936 to marry American divorcee Wallace Simpson.  This threw her father into the unexpected role of being the King of England and immediately made Elizabeth the next in line for the throne.  The princesses were very popular even before their father was the king and the family was the subject of many souvenir and commemorative items.

The small cloth dolls were part of a large group depicting characters present during the coronation of King George in 1937. I have the King George VI, Queen Elizabeth and the two princesses – Elizabeth and Margaret. These were made by a British company called Liberty of London and for such small creations, they have an amazing likeness to the people they were made to represent.  The range from about 5 inches to 9 inches. 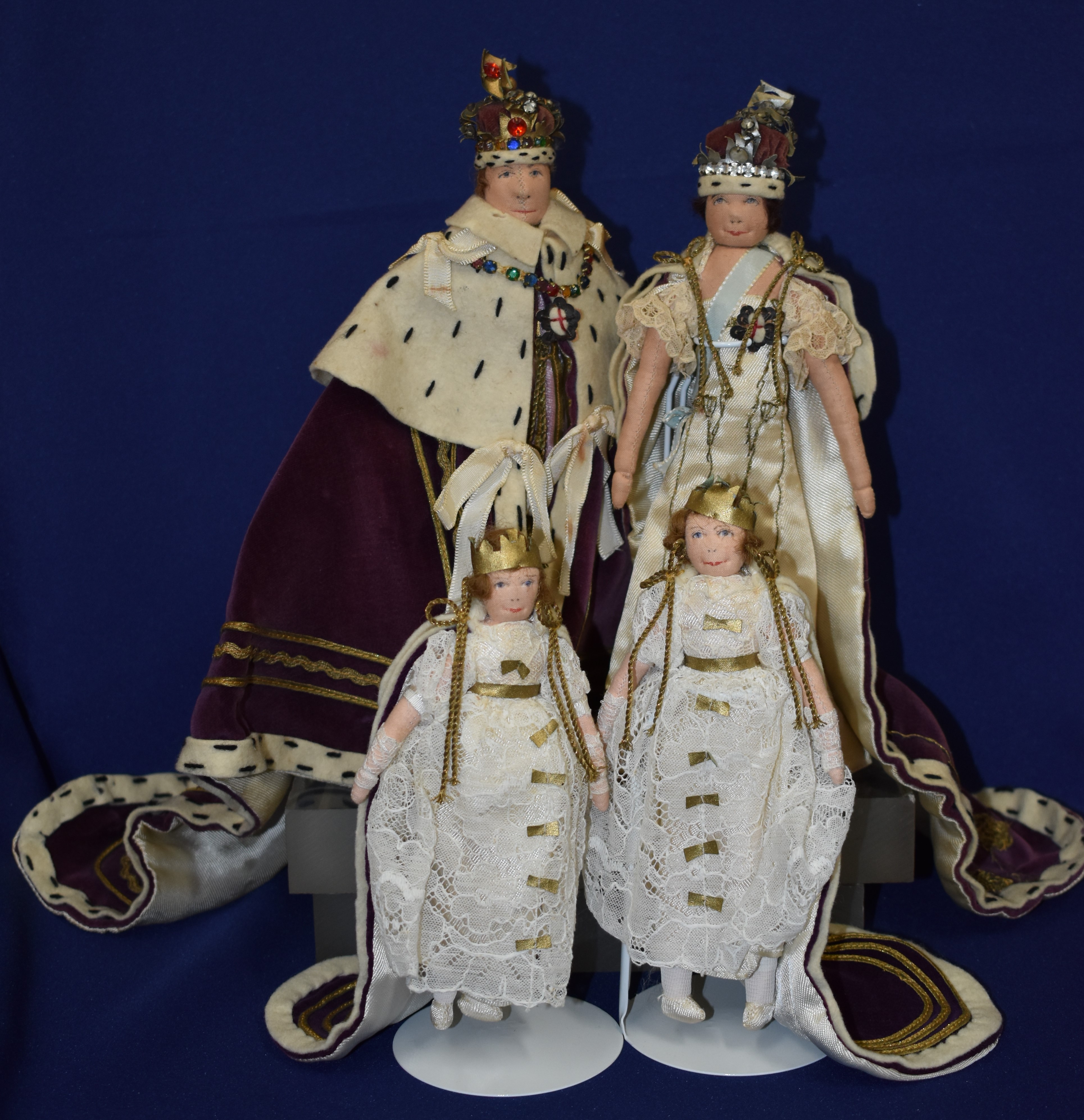 Many tea, candy and biscuit tins like this one were made to commemorate the coronation or simply picture the popular family.

The young Princess Elizabeth was a favorite of her Grandfather, George V. She visited him frequently and became popular with the press. At this early age, a German firm produced a bisque doll in her likeness. This doll was not authorized by her parents and they really didn’t approve of the doll. However bowing to the ever growing popularity of their child, they gave permission to an English toy maker – Chad Valley to create a doll in Elizabeth’s likeness. This is the very first version of the Royal dolls that Chad Valley made. It is a felt doll with glass eyes and had a very good likeness to the young princess, as you can see by the photos. She is even wearing the same dress. This version is not as easy to find as the later versions. 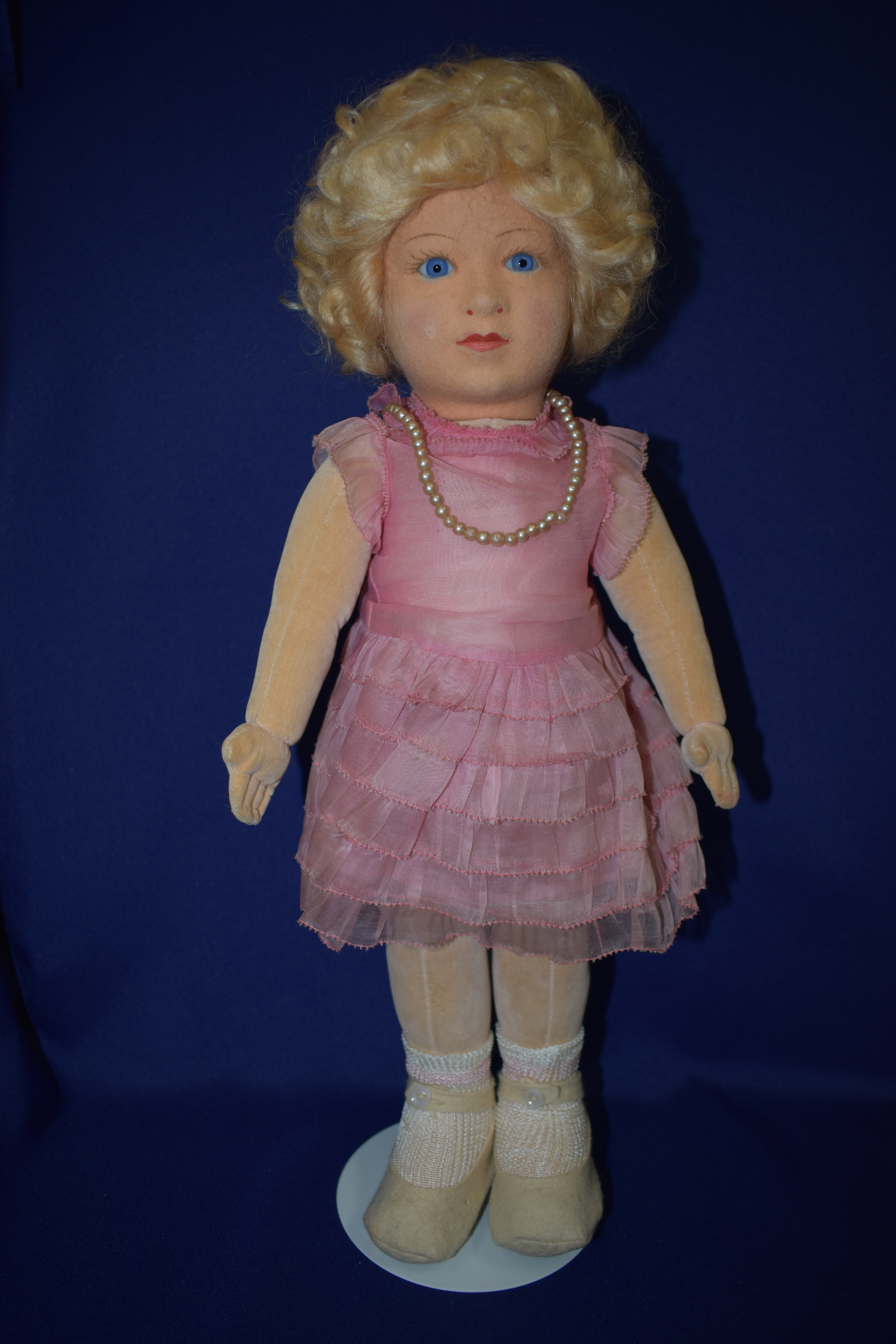 The two dolls below made by Chad Valley show Elizabeth and Margaret Rose. The tags show us that the Elizabeth doll was made prior to her father becoming king and the Margaret rose doll was made after. These came in various sizes and were wearing outfits similar to those worn by the princesses.  They are 16 inches and 18 inches. 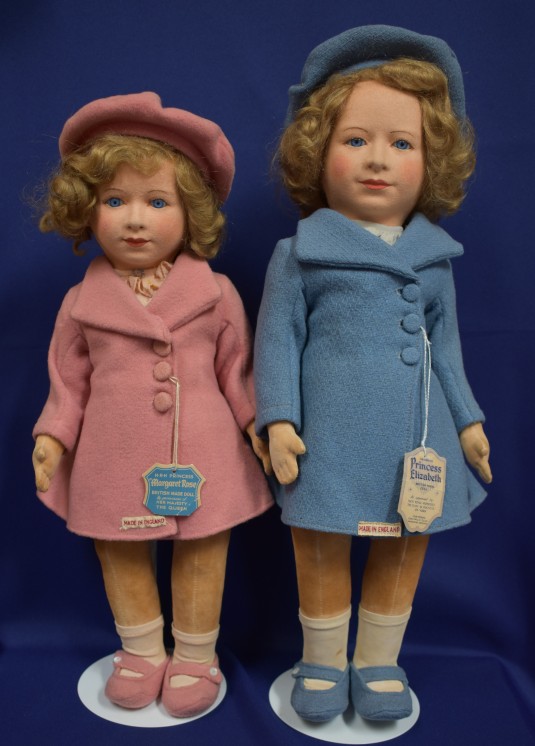 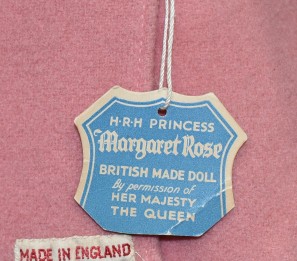 Some other items made around the popularity of the princesses 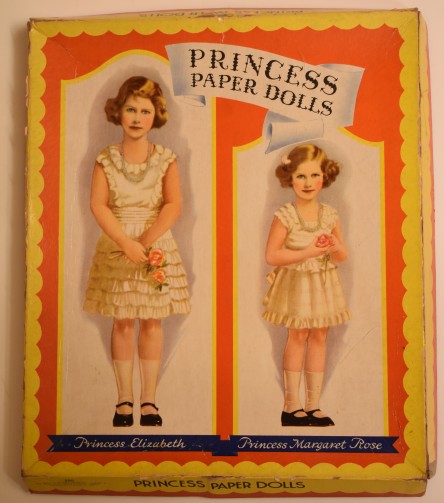 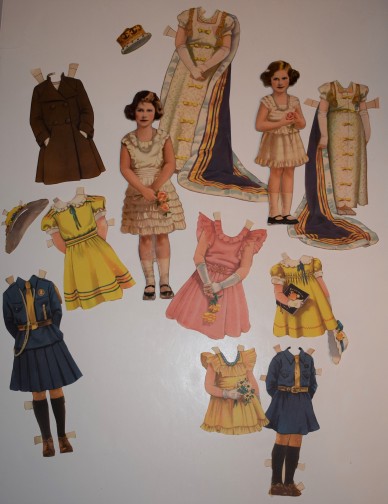 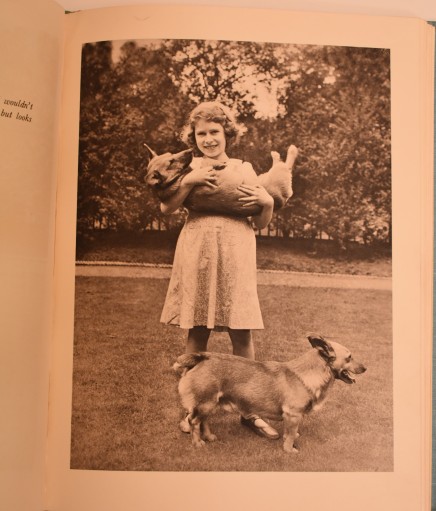 Book about the family and their many dogs.

A friend visited England a few years ago, and brought me back this charm of the Gold State Coach. The coach was commissioned in 1760 and has been used at the coronation of every monarch since George IV, as well as other special ceremonies.

It is said to be very uncomfortable. 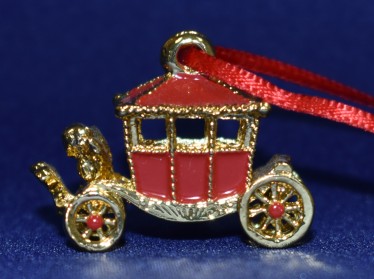 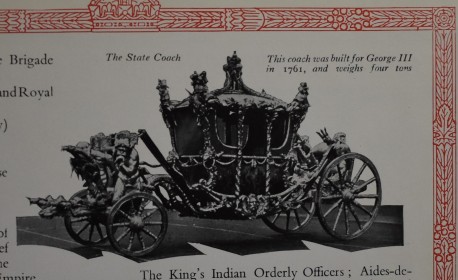 I also have a little coin purse stamped Buckingham Palace with a crown charm that I found on my own – not in England, although I’ve always wanted to go.

I can just imagine all of the royal items I would come back with! 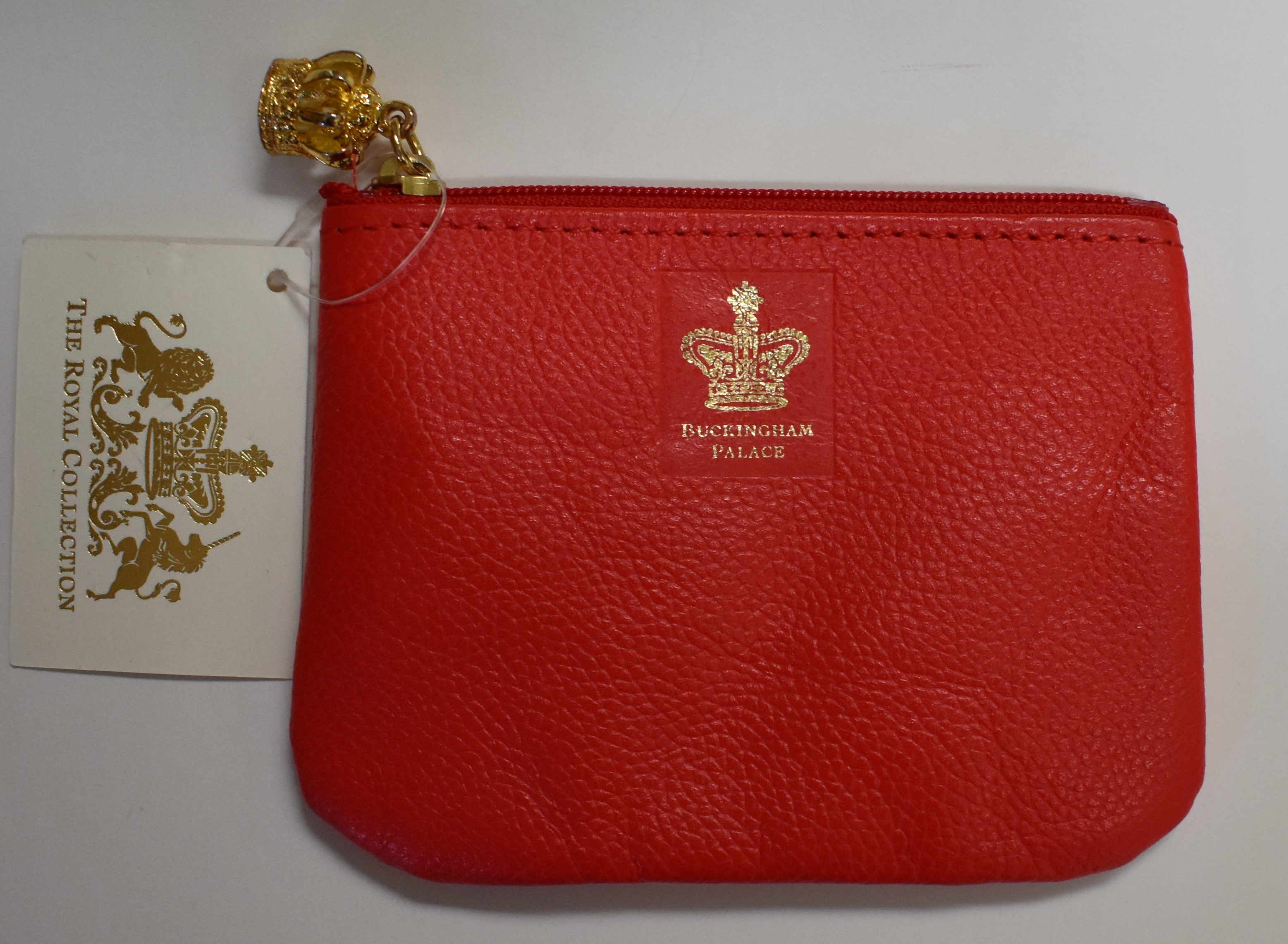 The English have produced mugs, plates and other pottery items commemorating the royals since the late 18th century. While I haven’t started collecting any of those 18th, 19th or 20th century pieces, I did start collecting these mugs commemorating the birth of the children of William and Kate. I got the mug when Prince George was born and then discovered the same type was issued for Princess Charlotte. 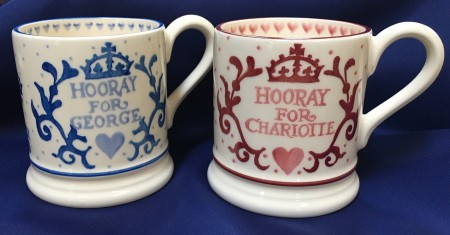 The mugs may not have been a wise idea for someone that is trying to slow down on collecting – I’ve just ordered the commemorative mug for Prince Louis.

I don’t think there is any danger of nine Royal babies again – I wouldn’t have space for all of the mugs!