August is always a bittersweet month for me.  I love the summer and yet I know it will be gone soon.  We live in the “Garden State”, so there is nothing like the corn, tomatoes, peaches, and blueberries that are abundant during the summer months here.  When I was little, I don’t remember ever having watermelon or strawberries during any time but the summer.  We are fortunate to be able to get many types of produce all year around now but they just don’t have the taste of the local treats fresh from the field. 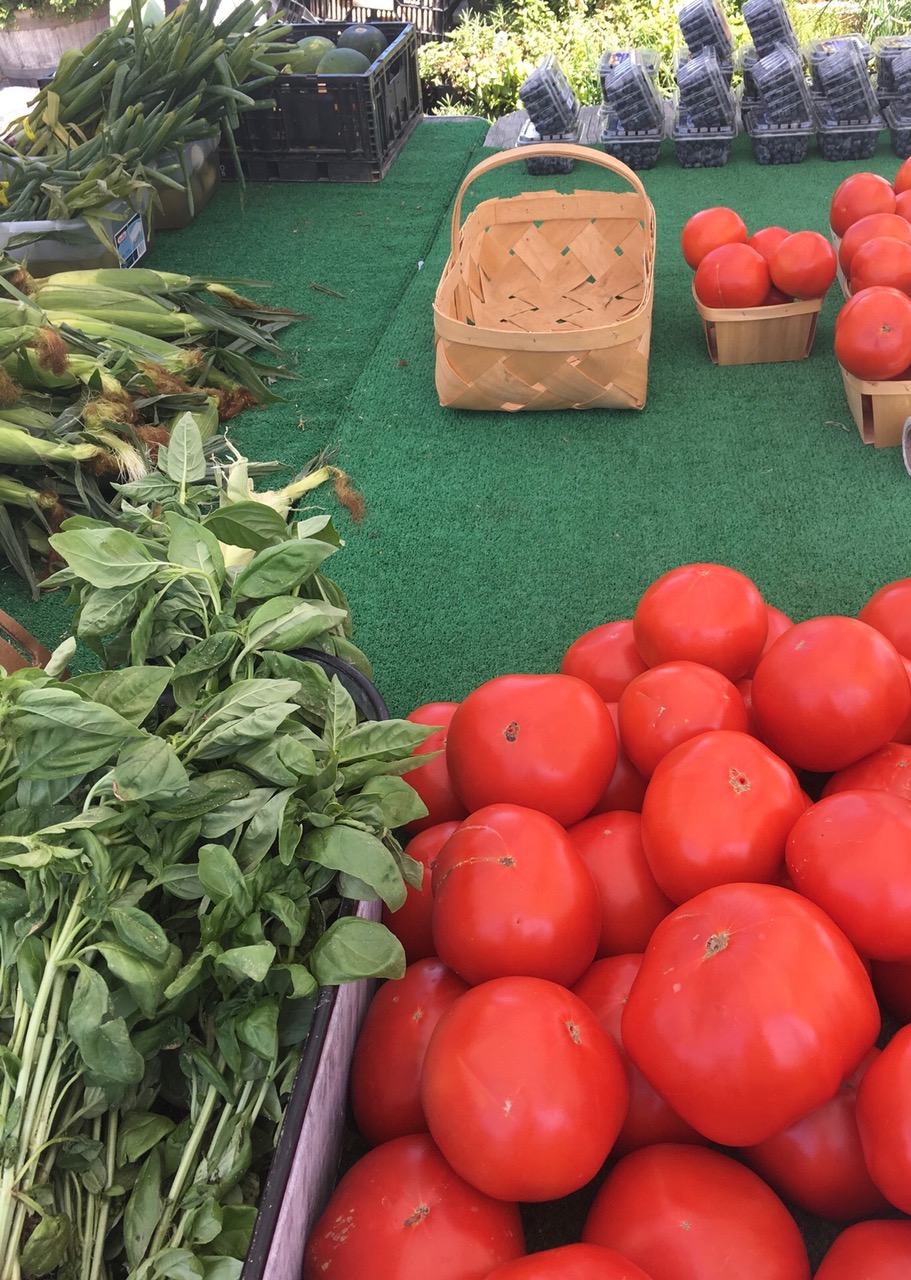 Last year, I tried making jelly for the first time.  It was a bit challenging, but worth it in the end.  So with thoughts of summer winding down, and wishing I could preserve all of the fresh fruits and vegetables – I thought it was a good time to look at my collection of jam pots.

This was not a collection that took years to amass.

The first pot – an orange marmalade pot arrived around 1969.  As previously mentioned, we had just moved to a new house in Philadelphia with just my Mom.  Mom came home from shopping one day with this little pot and placed it on the kitchen table. 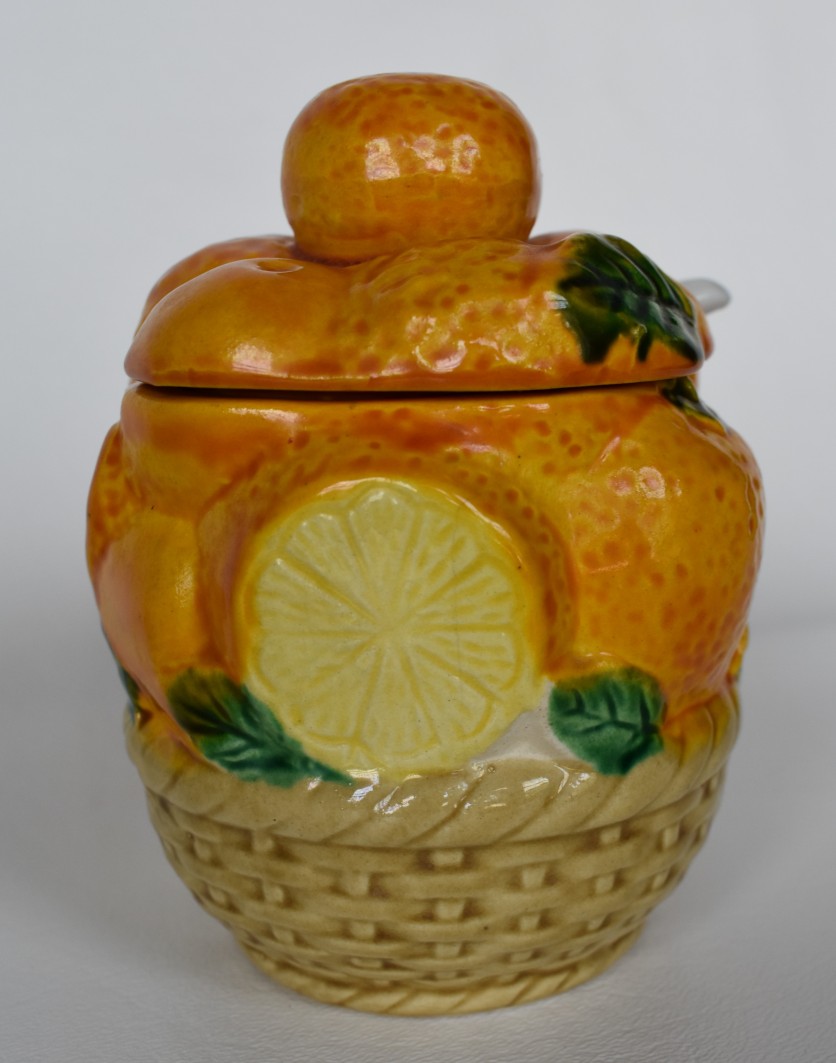 I loved it for many reasons.  First of all, it was nice looking and I had never seen one before.  Secondly, it seemed a cheerful touch, and I was glad my Mom felt happy enough to think about something that was not critical to our outright survival. The pot had a little porcelain spoon and of course I wanted it filled. We had grape jelly, but that wouldn’t do.  After some amount of pestering, my Mom got a jar of marmalade that I could transfer to the pot.  I didn’t even like marmalade when I was little…I thought it was bitter, but in this case it was the only option.

At some point, when I moved to one of my apartments, the jam pot came with me. 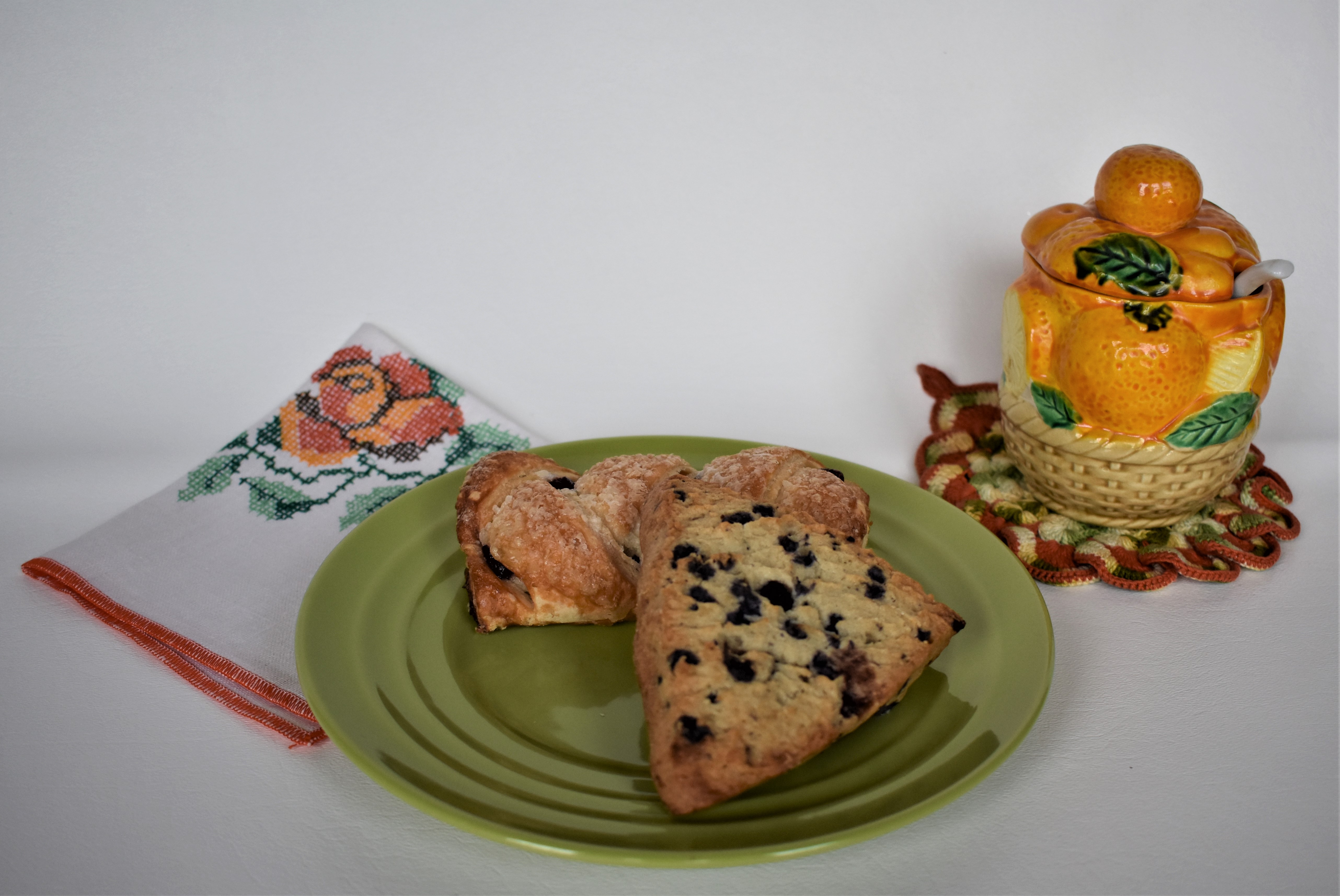 So this jam pot was it for many years until one day in the late 1990’s or early 2000’s, I found this apple pot in a thrift shop.  I was happy to find it, not really ever coming across any that I remembered. 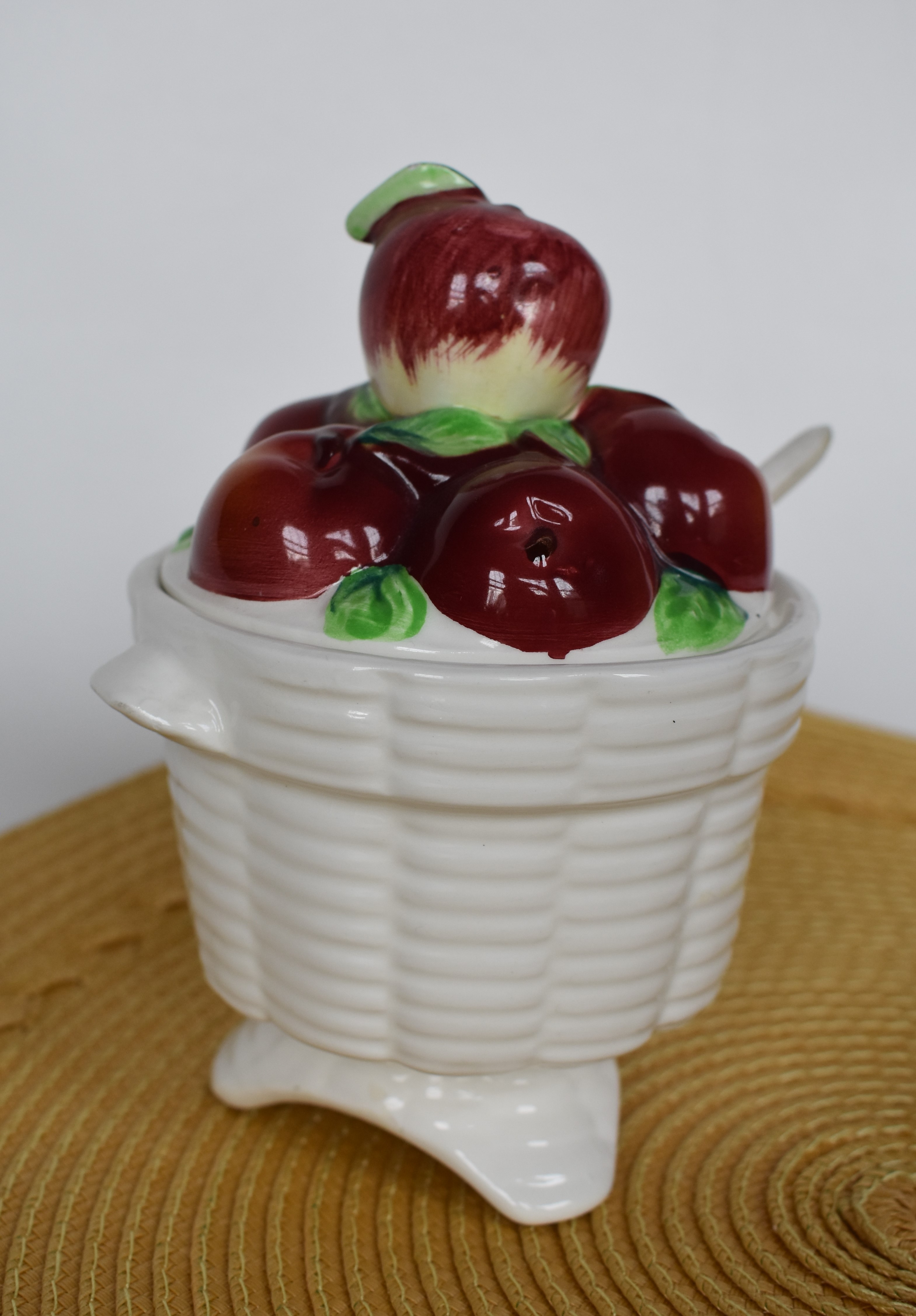 I didn’t actively start looking for them at that point. Then, a few years later came the apple – found at a flea market, and as previously mentioned, here is where I get into trouble. 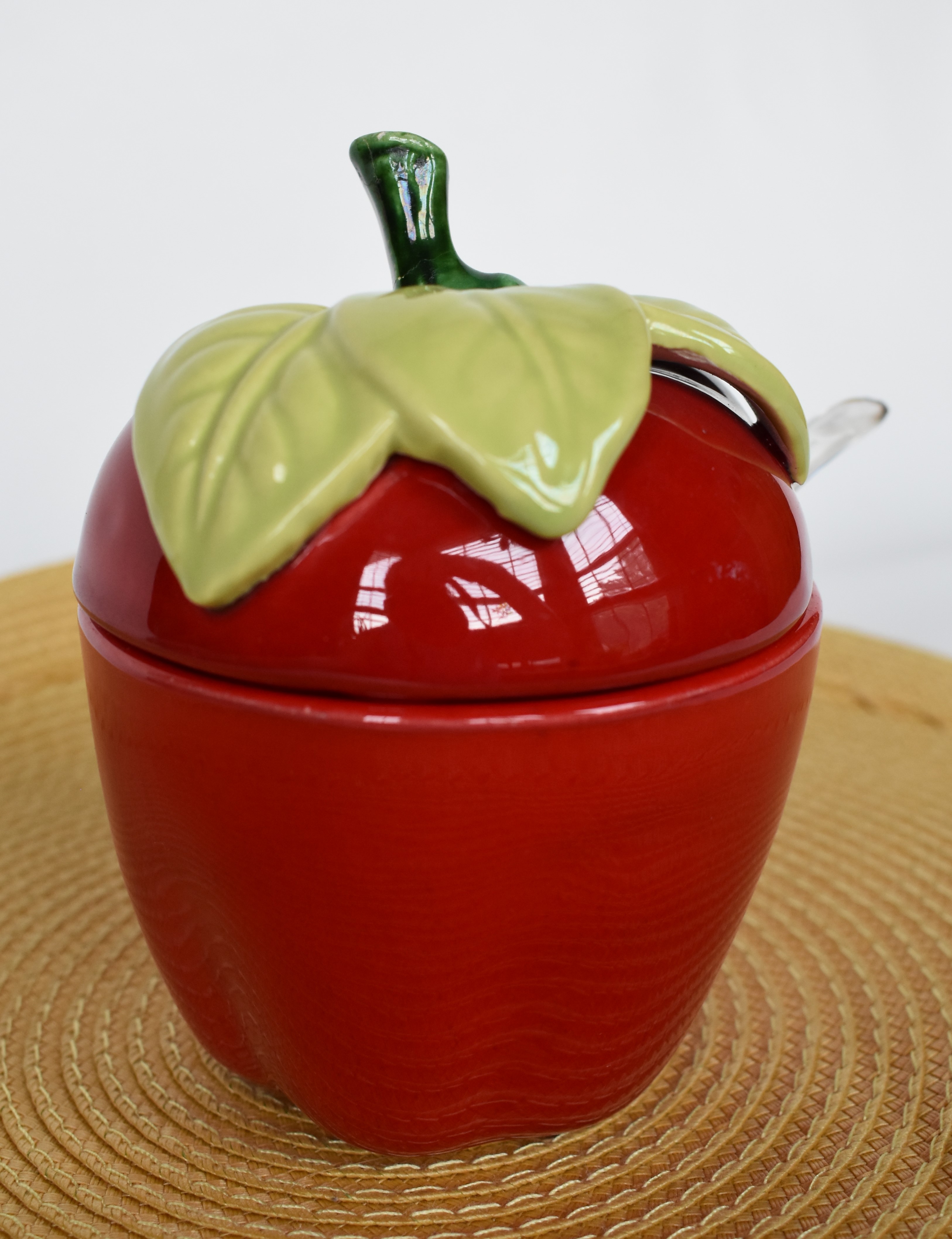 When a group starts forming…

I feel compelled to add to the group.

When I found the grapes at an antique shop and that was it – I wanted more. 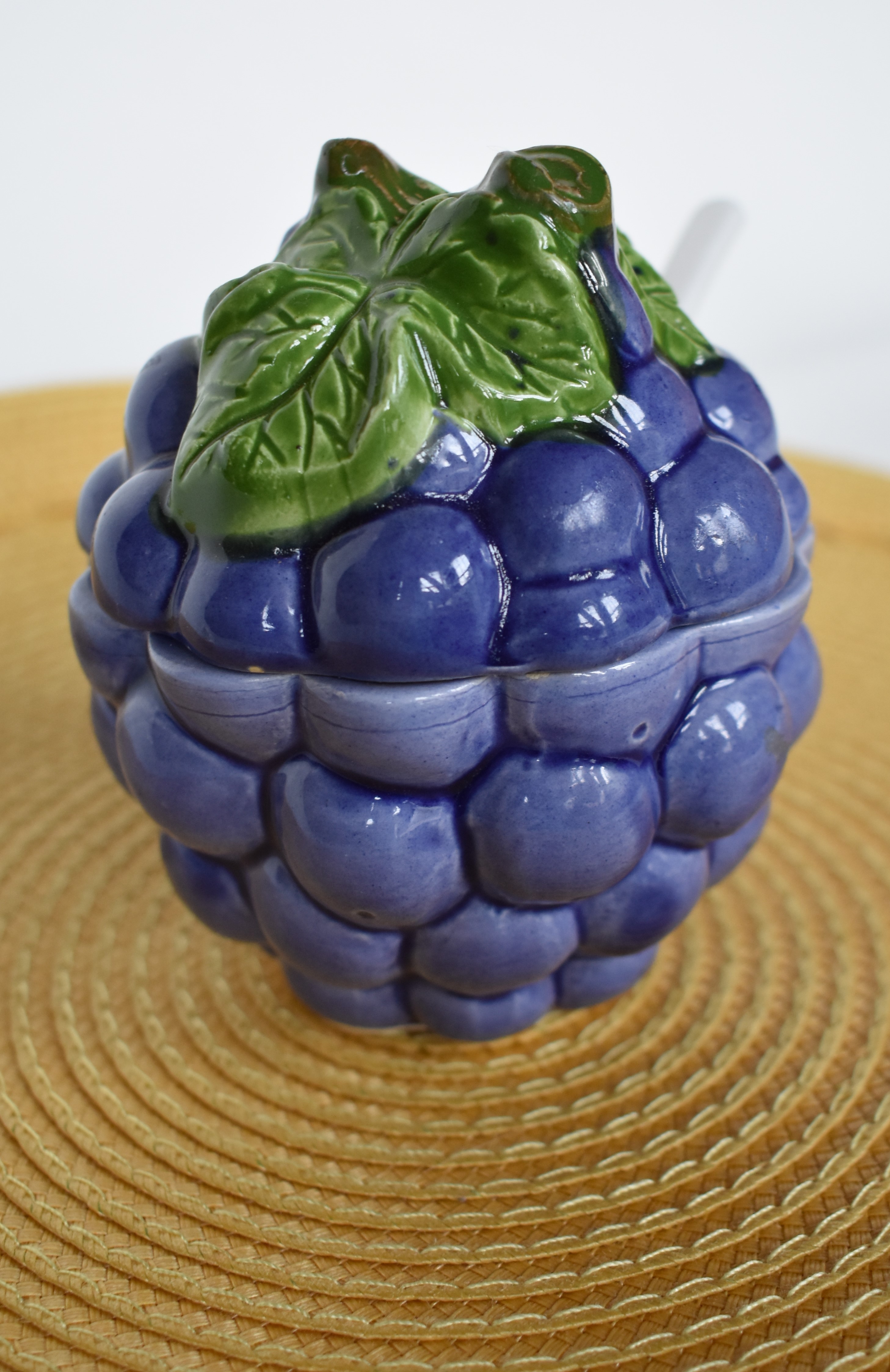 When similar objects keep crossing my path, I take it as a sign that I’m supposed to be collecting them.

Turns out – these are not hard to find and the online marketplace was a treasure trove.  I began to look for pots that appealed to me (very few don’t). 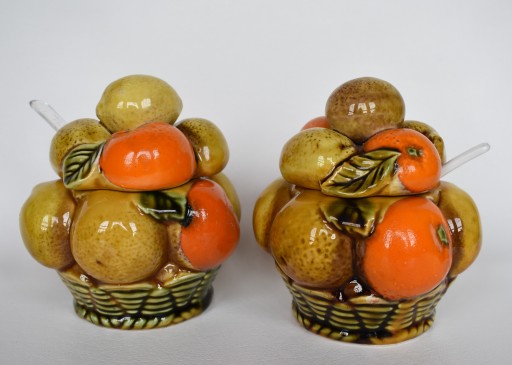 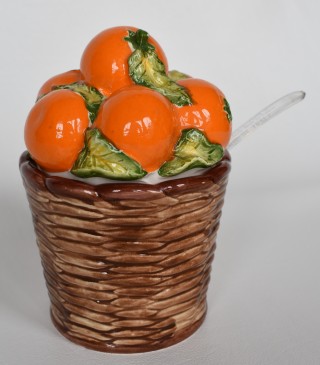 Not many have the little spoon with them anymore and since that’s how I remember the first pot, it seems to be a requirement for all of them. It took me a bit, but I finally found a place online that sold the little plastic condiment spoons. Not perfect, but better than no spoon at all.  Some have nice little spoons that coordinate with the design.

They are so colorful and cheerful and I think they look nice as a group even if they are a bit old-fashioned looking.

A grouping of berries – these are among my favorites! 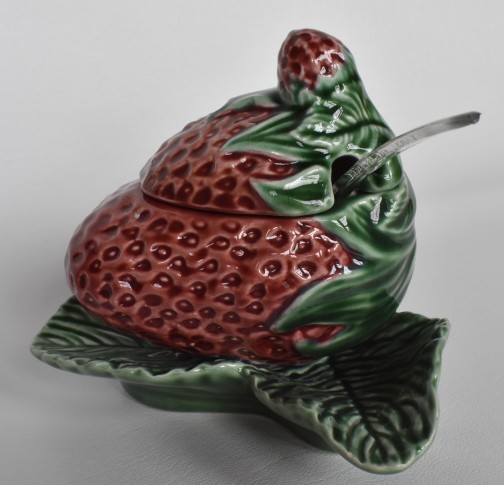 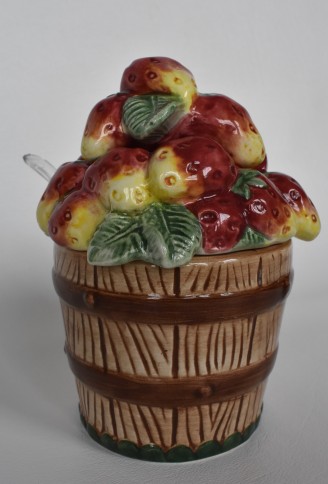 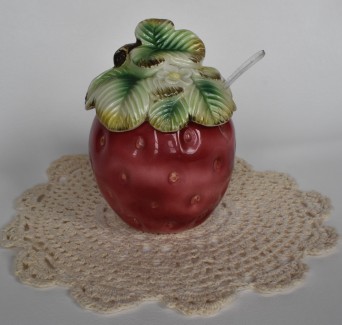 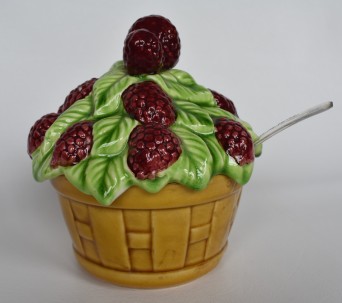 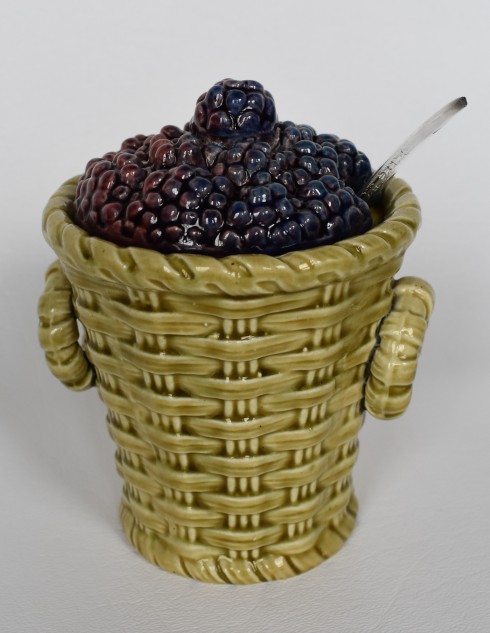 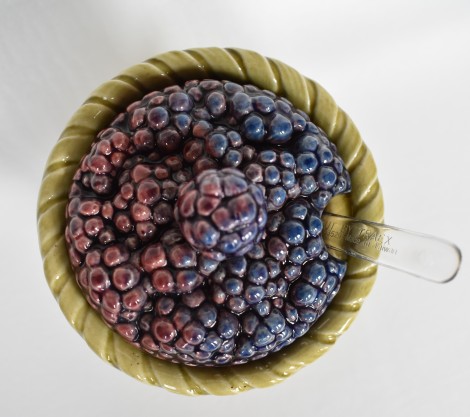 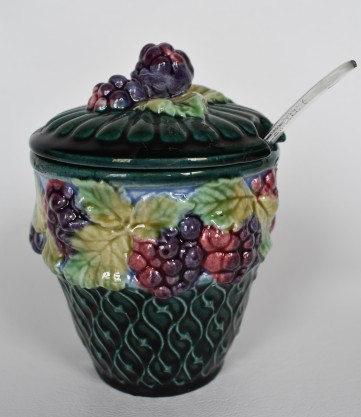 More grapes on a doily that my Mom crocheted… 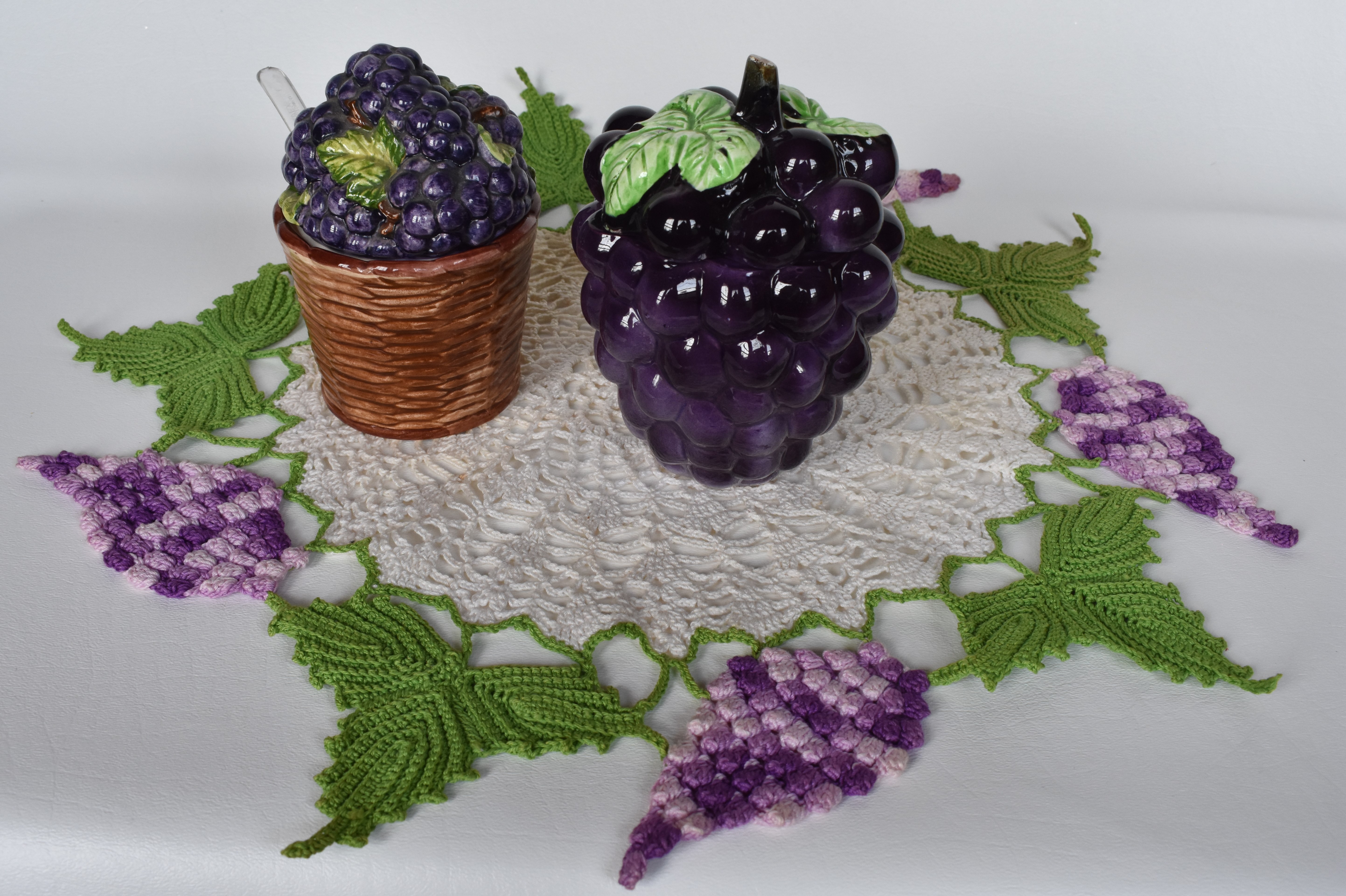 Some other things that are not exactly jam pots, but display nicely with them. 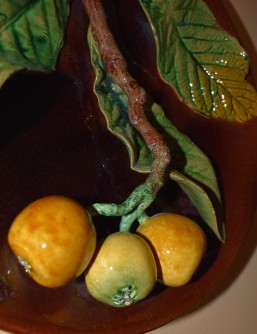 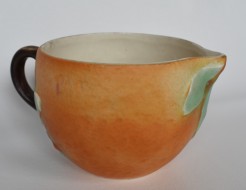 Salt & Pepper – could have been with the bugs! 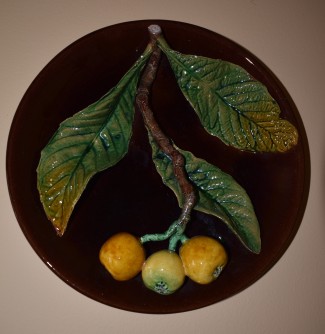 Full view of the plate 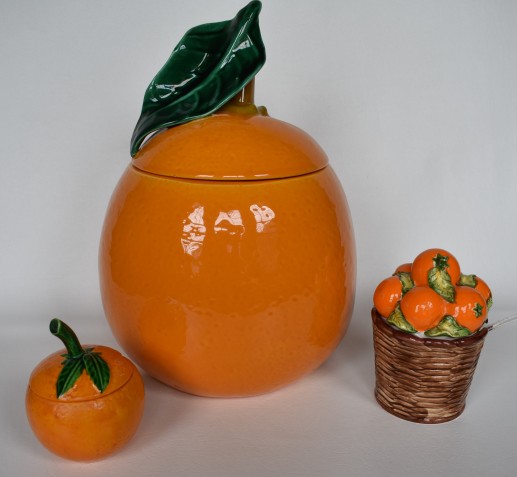 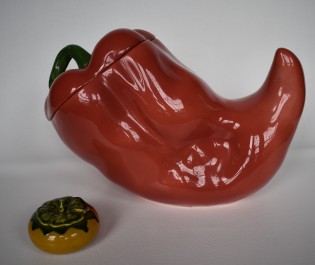 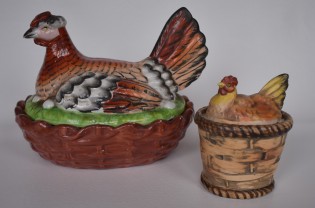 Maybe I like them because of the homey, happy feeling I got from that first marmalade pot.

As with most of my collecting, I’m forced to stop once the area I’m using for display has reached maximum capacity. Sadly, that is the case with the jam pots…

I’m simply out of room or I would be happy to add more!