After a bit of a break, I thought I’d write about my vast collection of Scottie dog items.

My very earliest recollection of a Scottie was my Mom drawing the boxy silhouette of a dog, shaded in with the pencil to make him black and telling me his name was Angus.

I was really young – not even in school yet. At the time, I did not know there was a book series about a Scottish Terrier named Angus. These books were written by Marjorie Flack, and were originally published in the early 1930’s. My Mom was born in 1925, so I think she must have known them from when she was young. Formed at such an early age, it became my standard image of a dog and whenever I asked my Mom to draw a dog, it was the Scottie!

After several years of obsessing with German Short-Haired Pointers and Dalmatians (something about the speckles and spots), it occurred to me out of nowhere that I wanted a Scottish Terrier! 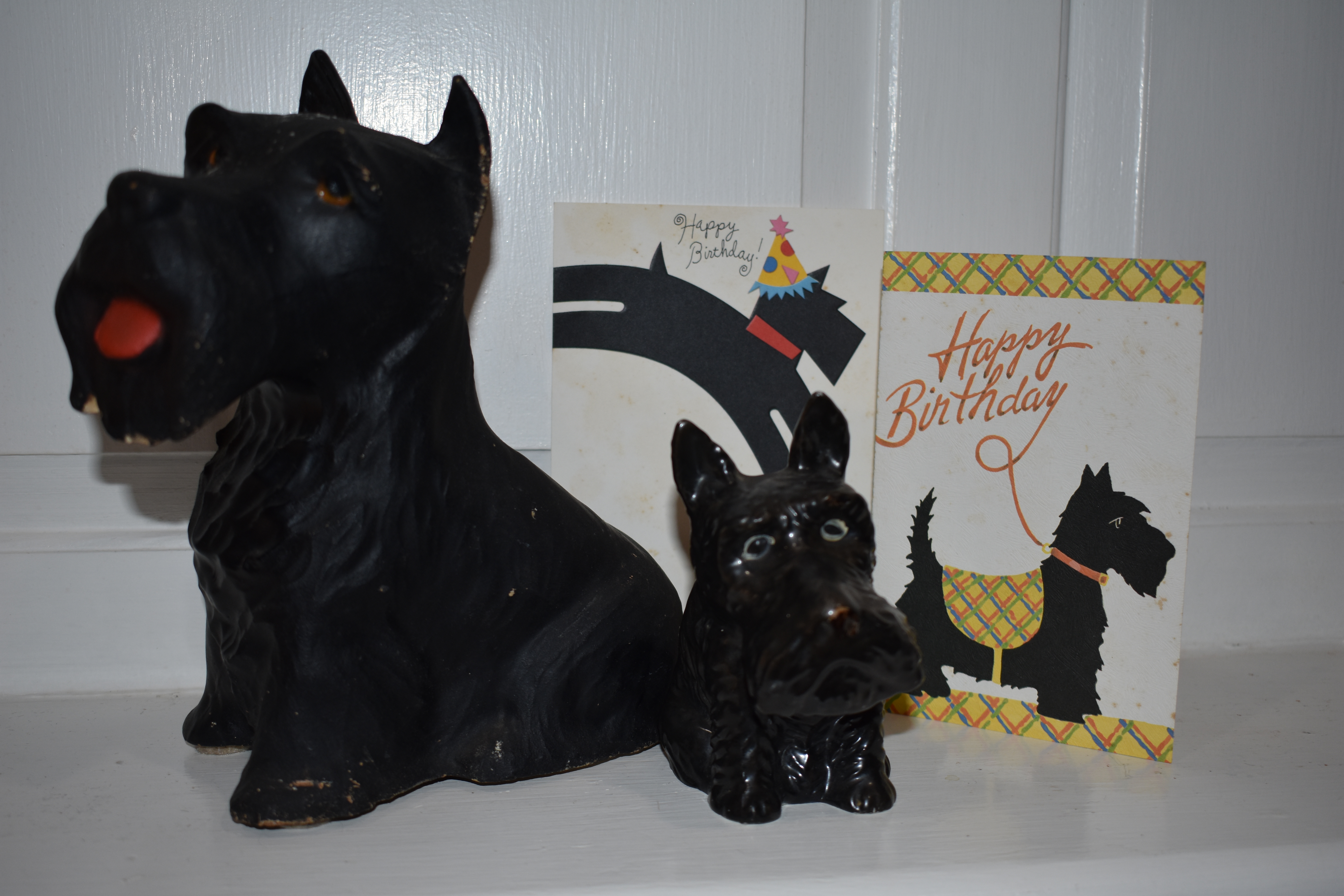 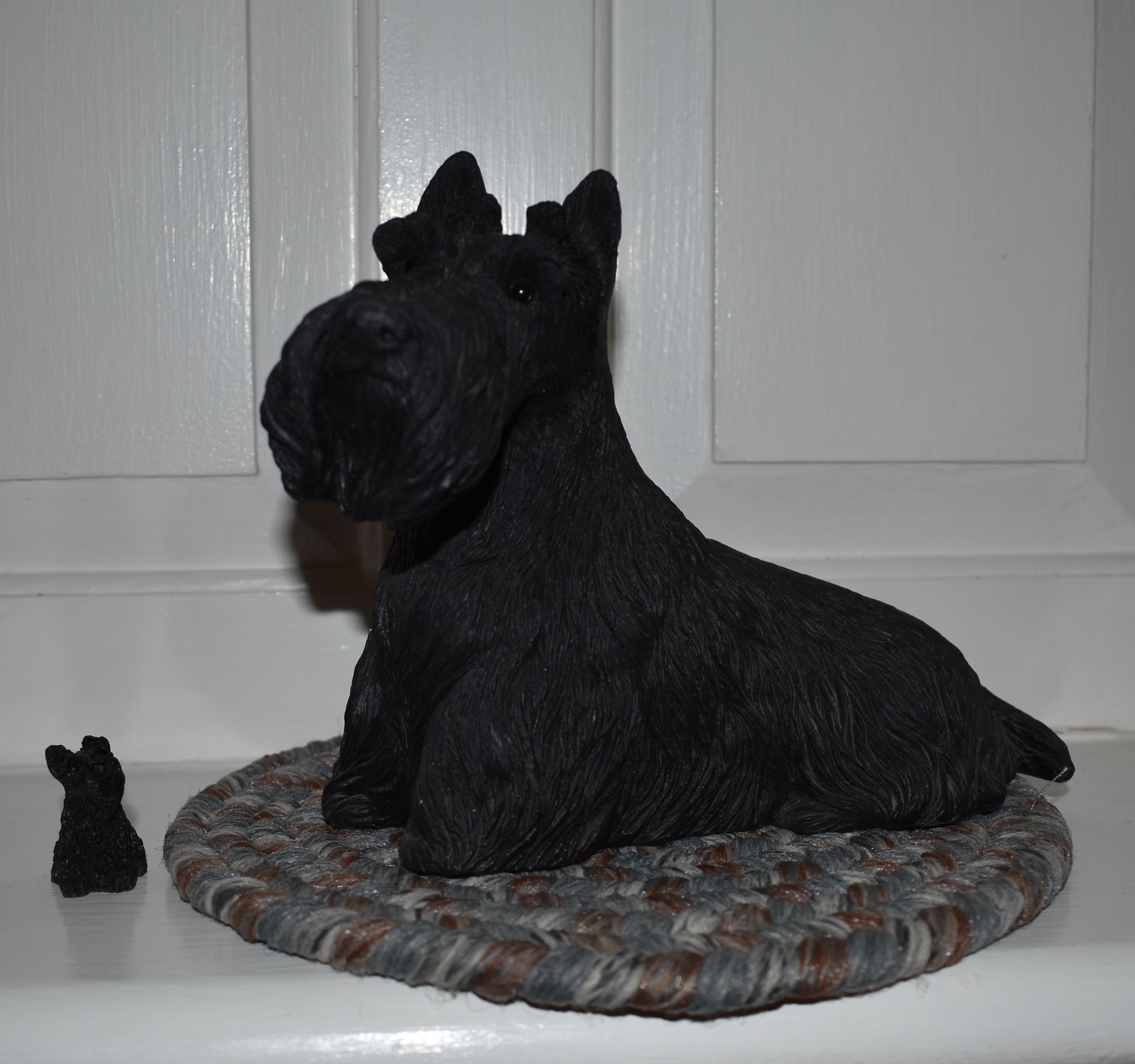 I was living in an apartment and my Mom was very much against me getting a dog. I found a litter available and my sister drove me to pick one out. Both of the parents were there – I had never seen an actual Scottie dog and they were smaller than I imagined. It was several weeks before I could pick up my chosen pup. Finally, my sister took me to get him, and we brought him back to her house where my Mom was waiting (she did not want to make the trip). Mom wanted nothing to do with the new arrival – she didn’t even want to look at him! He was a black puppy and, of course I named him Angus. Angus MacGregor to be exact – Gus for short. After a while, I asked my Mom to just hold him for a minute while I stepped away, and the rest was history. A great and loving bond was formed between the two…how could it not be? I told my Mom, you made me get him subconsciously with all of the Scottie dog drawings named Angus!

And so began the great era of Scottie dogs for me. 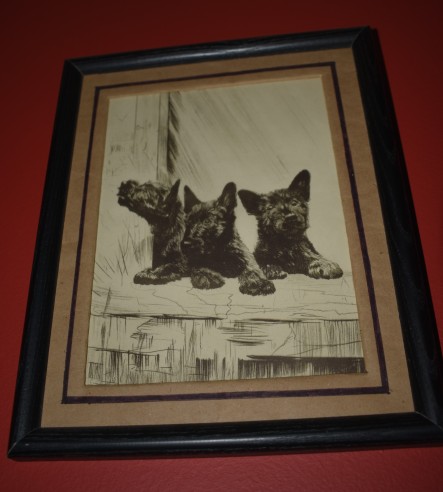 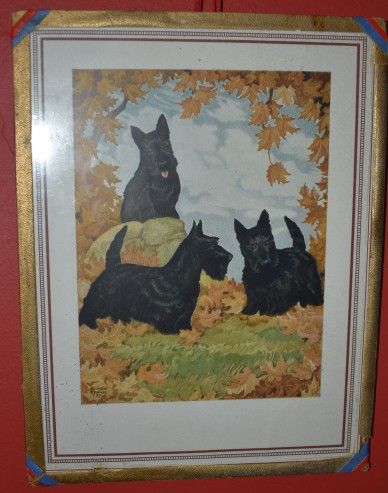 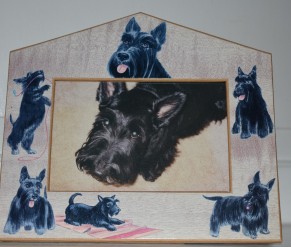 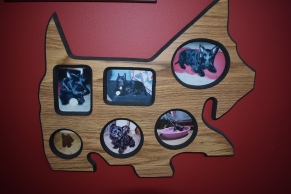 Gus was a wonderful dog, but as any dog expert will tell you, Scottish Terriers are not exactly for beginning dog owners – they are very strong willed. Gus was a master at taking control and manipulating situations. Don’t get me wrong, he was a good dog, and smart – but he was definitely the boss.

He was bold and adventurous and I took him everywhere! 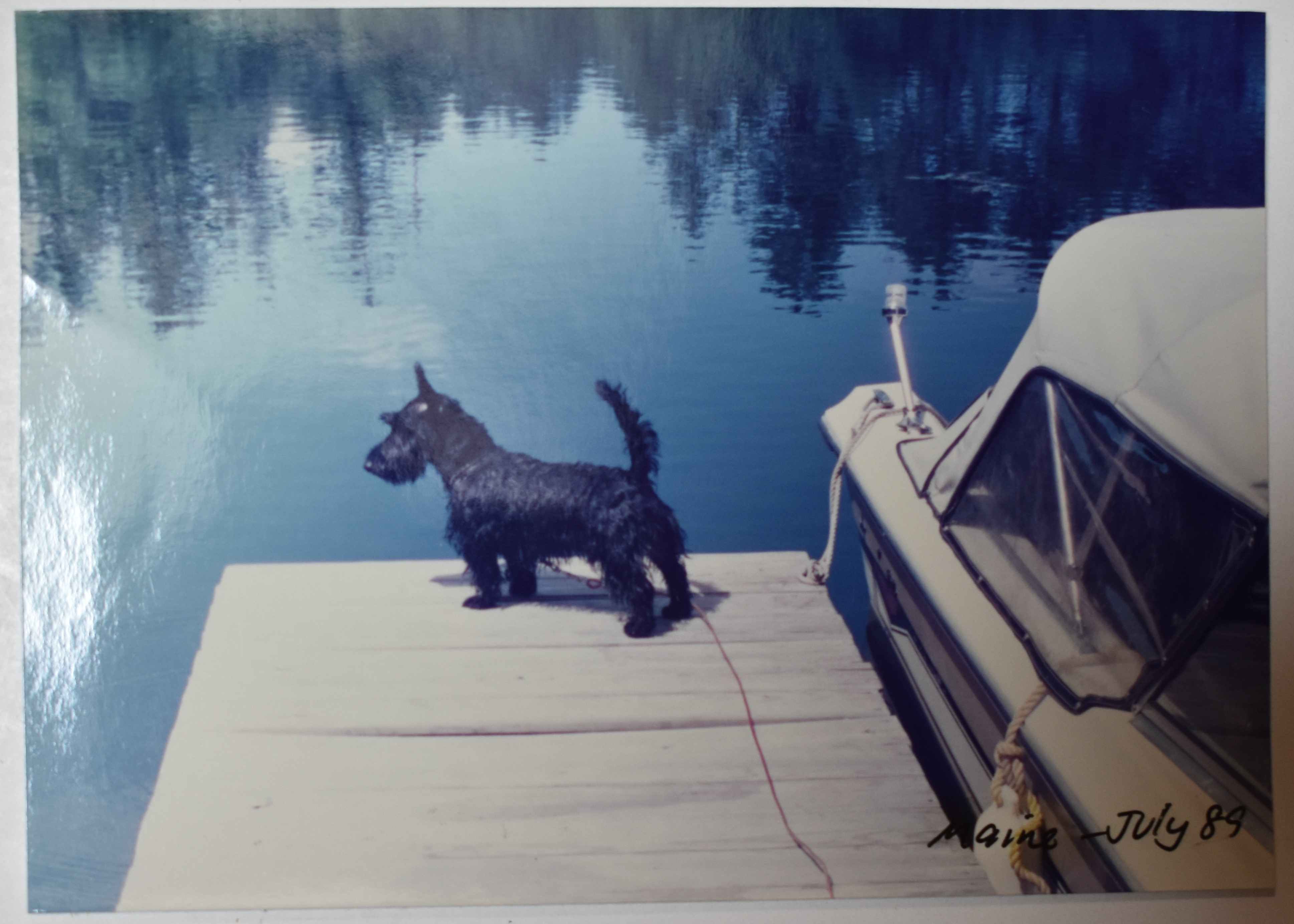 Gus won a photo contest for the Mighty Dog Calendar in 1994. Contrary to most experts, he loved the water and had his own wading pool. But his true love was going to my sister and her husband’s house with the big pool. He had his own float and it was a photo from this setting that won him the August page in the calendar. Along with the honor of being in the calendar, Gus won a good bit of swag and was able to make a food donation to the shelter of his choice. At the request of his groomer, he made an appearance at a local dog walk event and distributed “signed” copies of his calendar. (I had a stamp made of his paw print).

Gus lived a full life and was a major presence in our world.

When he left us, we filled the void with a new Scottie pup – Duncan MacBean, aka Bean. 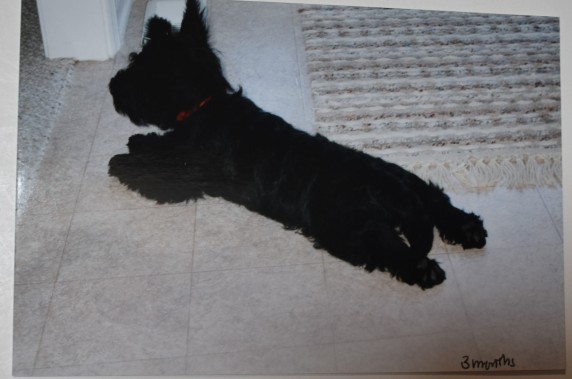 By now, my Mom no longer needed an adjustment period. She loved Bean instantly, always calling him “Bean dearest” and they thoroughly enjoyed seeing each other on weekends. I went a different route with Bean – obedience school in the first week we got him!

He loved school and he was a perfect student, enrolling and excelling in several programs including agility. They really just want to know the rules.

The personalities of the two guys couldn’t have been any different. 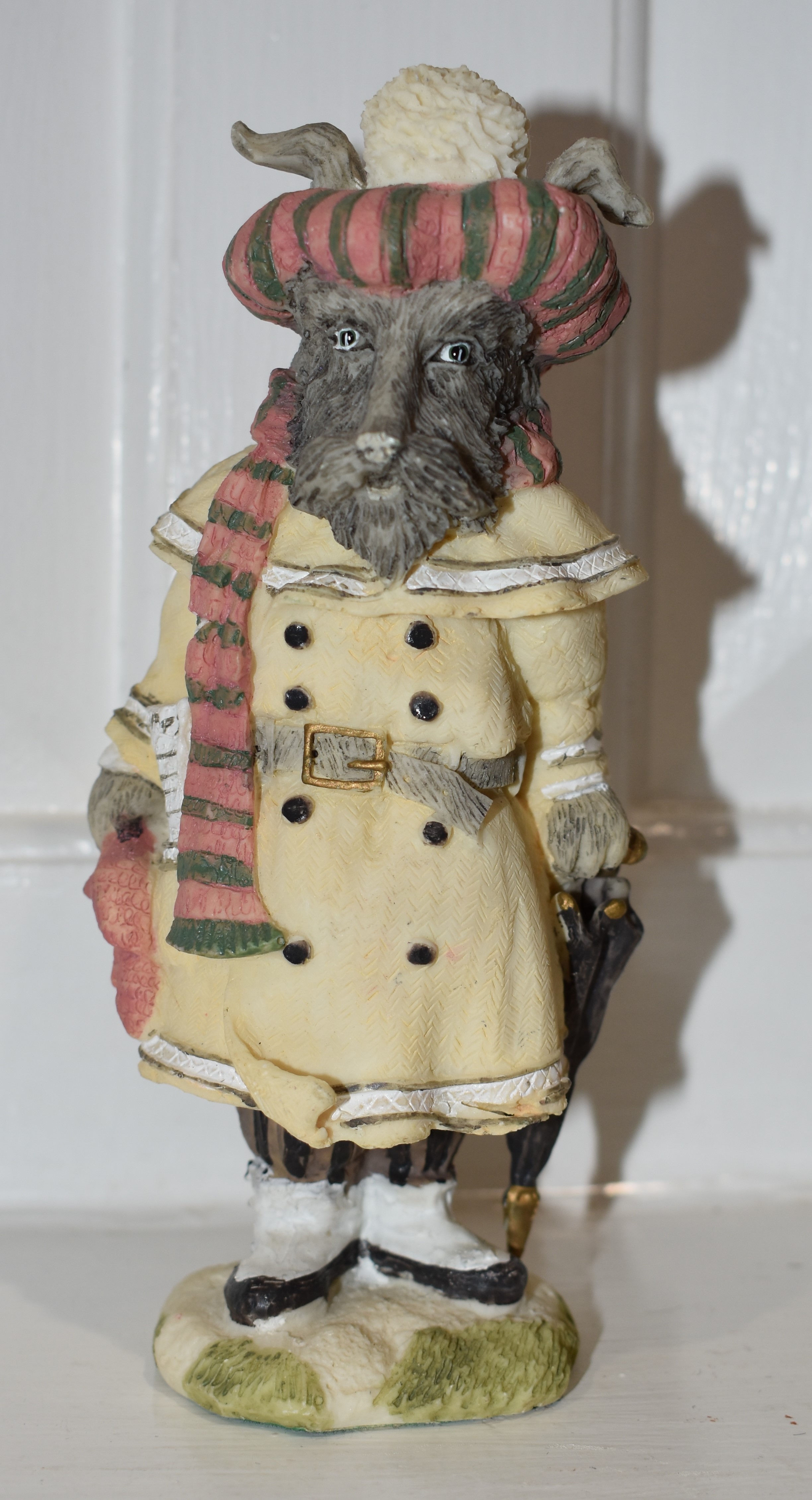 He was much more serious and would be embarrassed and sulky if he did something clumsy or that made you laugh.

For Bean, the sillier the better. He was always going for the cheap laugh.

At their core, they both had the same great Scottie traits that I love.

Since President Roosevelt had Fala in the White House, Scotties have been popular for decades. My Mom and I took a trip to NY and made a point to visit Hyde Park and the home of the Roosevelt’s. They have many of Fala’s items on display. Scotties appeared in several movies that I know of in the 1930 – 1940 era, and of course the role of White House Scotties was reintroduced during the Bush years with Barney and Ms. Beasley (I loved the Barney Cam). 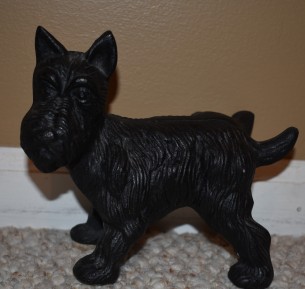 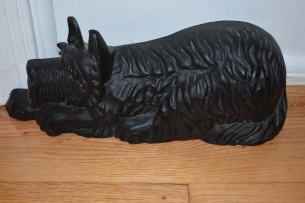 A selection of vintage and some “newer” metal Scotties

You can’t even imagine how many items you can get with Scotties. 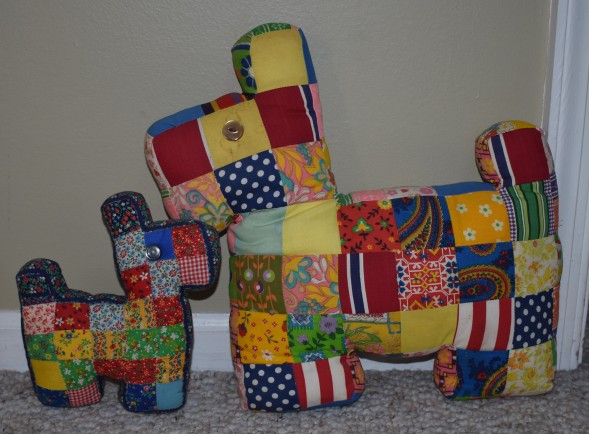 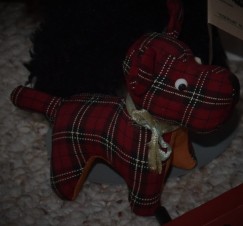 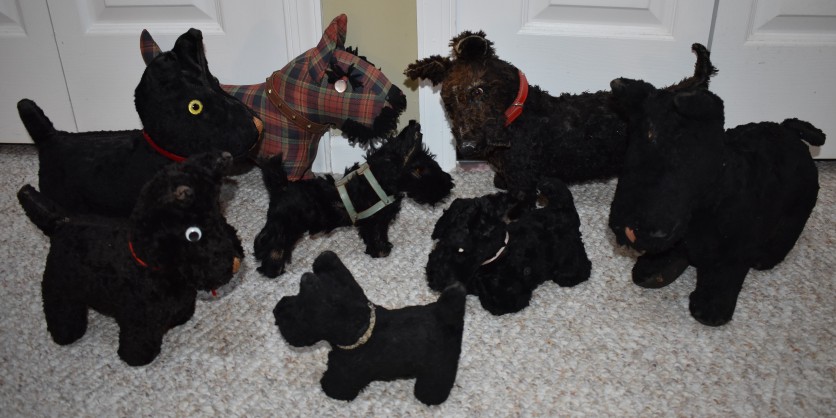 In addition to the items I got for myself, I received many wonderful gifts as well. Since they’ve been popular for so long, there are a lot of vintage items along with new items, all featuring Scottie dogs…many things not pictured! 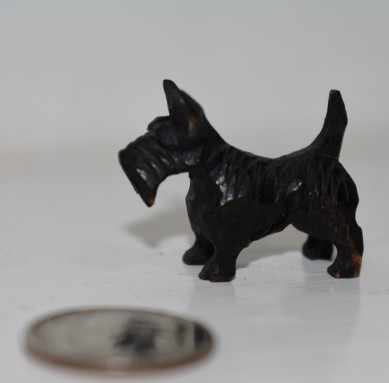 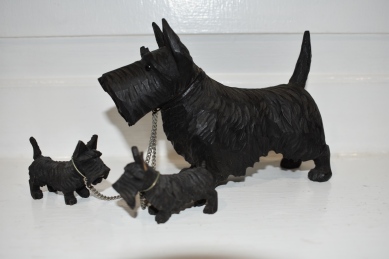 A selection of carved wood Scotties…the top one very tiny – next to a dime!

At one point, I had Scotties everywhere…

Toys and other items 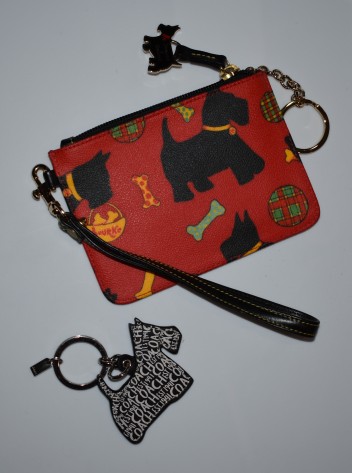 In the early 2000’s I made a second small Christmas tree with all Scottie ornaments, which eventually transformed in to the main larger tree. 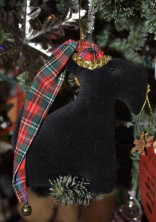 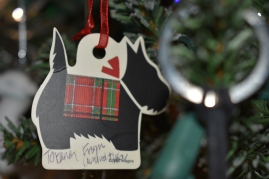 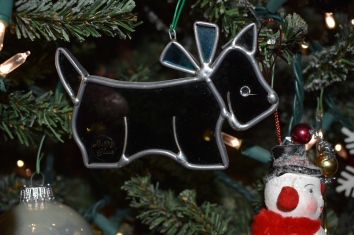 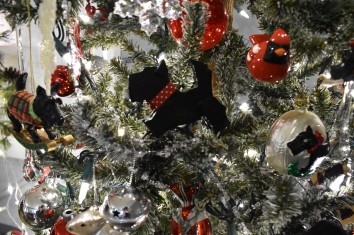 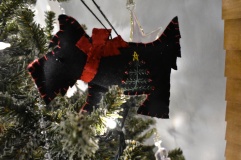 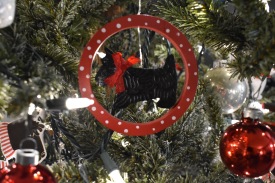 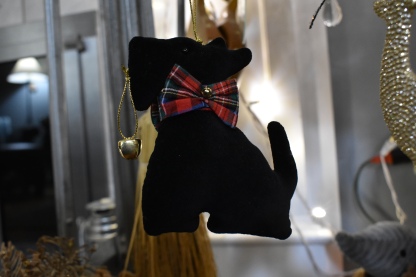 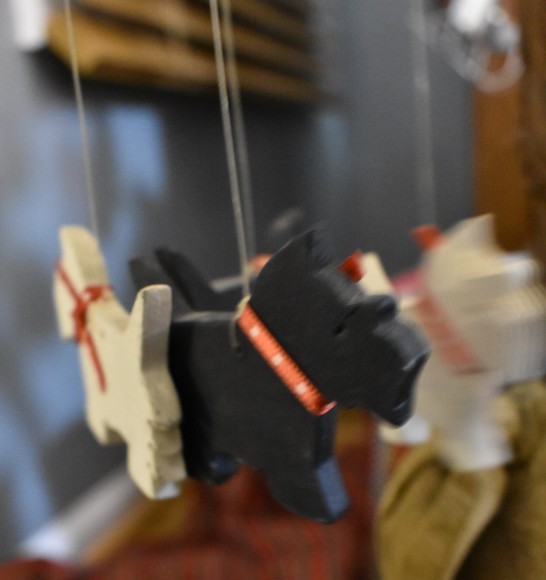 Ornaments on the tree! 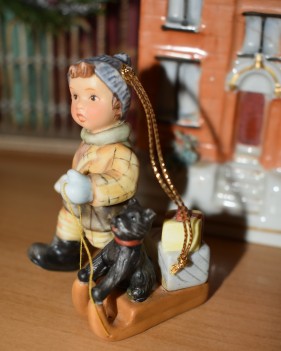 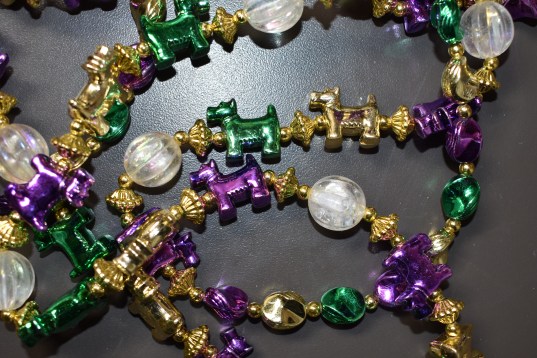 The Christmas tree still features Scotties every year, and they still make me smile.

Scotties will always have a special place in my heart. We haven’t had a dog since Bean left us in 2012, but I still have Scottie items around the house and they are reminders of the 20+ joyful years of having a Scottie dog in my life. 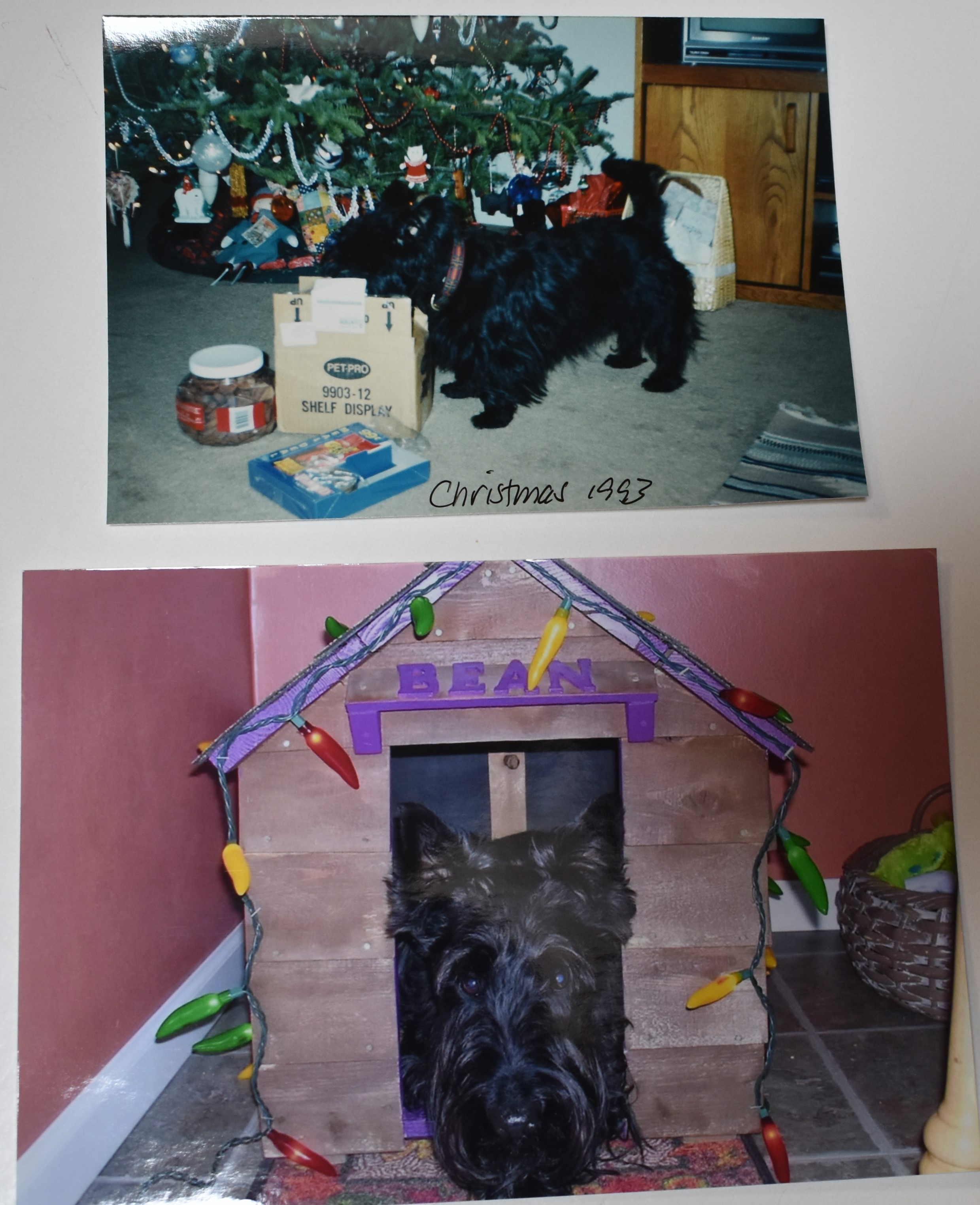 2 thoughts on “Scottie Dogs – Near and Dear To Me…”