In 1968 we moved (first with just my Mom), to a house in a completely new neighborhood in Philadelphia. Fourth grade, the year we moved to the new neighborhood was particularly tough. For the beginning of that grade, I went back to the school that I went to for first grade. This required taking 3 pieces of public transportation at the age of eight.  I remembered some of the kids, but none of them remembered me. It was a bit isolating really, but there was so much always going on at home that one more thing hardly seemed to matter. For the second part of that grade I started a new school – thrills…

Things on the home front started settling down by 1969 or 1970, and my Dad eventually joined us, although I don’t exactly remember when. I know I felt more peaceful in the new house for the time he wasn’t there, but he seemed to be making an effort to address his issues and so it was again time to adjust.  The house was just half a block to a bustling avenue lined with stores. This was a new experience since the house I grew up in did not have a district like this within walking distance. It was sort of like the internet is now – putting many things within easy reach…This is a slippery slope for a collector!

The avenue had a 1940’s charm about it with several blocks of storefronts with big display windows. The street had the old granite block cobblestones. A trolley route ran up and down the length of this avenue. On the four corners that intersected our street and the avenue were a large bank, a Presbyterian Church with glossy red doors, an upholstery shop and I think the fish market was on the other corner. You could get fresh fish to take home and cook, or you could eat in one of the few booths they had set up. It’s amazing to think of how many businesses were able to thrive in these neighborhoods. Among the other shops were a fine jewelry store, two bakeries, a men’s clothing store, a dry cleaner, Post Office, deli, a produce store, a butcher shop, a Pennsylvania Dutch store, a shoe store and a great family run 5 & 10 cent store. That was a really old store. I’m not sure what it was, but it looked like it could have been a Victorian era dry goods or general store with built-in shelves and counters along the walls and rows of tables and shelves full of merchandise in the center. The floor boards had deep grooves worn in them from so many years of footsteps, and it had wood double doors with glass windows and a marble step that was also worn down from use. I think it had a painted tin ceiling too. All of this was within a close walking distance – we didn’t have or need a car.

But my favorite place of all, was a card and gift store!

I’ve tried, but I don’t even remember the name of the store – I was on auto pilot getting there. It was run by an older woman and a man who wasn’t as old – I assumed he was her son. It had two sections full of cards and gifts and the great thing was – at that time, they had a lot of items that looked like they were already in the shop for decades. Dusty and old-fashioned looking things high on shelves and I loved it there! Toward the back of the store there were floor level cases with sliding glass doors and fluorescent lights that sometimes flickered annoyingly. These were full of small knickknacks that I wanted. The cases were the perfect height for me to just sit on the floor and study everything behind the glass. I don’t remember too many customers being in there and the owners never seemed to mind me hanging around – who knows how long I stayed. In fact, there were days I’d go there for a bit after school and they would have to turn the lights on. They were always very patient taking the items from the case that I wanted to see. I started telling my Mom about all of the treasures in there. She assigned me various easy tasks in order to give me a weekly allowance. I could barely wait for them to open on Saturday morning and I would be there – cash in hand, ready to buy. Thinking back, I may have been their best customer.  As I mentioned, they had lots of things – vases, trinket boxes, statues, artificial flower arrangements, but for me the coveted items were sets of miniature bone china animals.  I was obsessed!

This collection was my first real pride and joy.

Each set usually consisted of three pieces – but sometimes four or five. The animal sets seemed to basically represent a mother, father and baby in each or sometimes a mom and several babies. Other sets depicted various characters from nursery rhymes or other stories. I don’t remember what they cost – I want to say around $1.50, but I just don’t recall. My first set was the brown bears pictured above. Why I chose these as my first I can’t say since there were many other choices. They also had some animal figures that were larger than the bone china sets. I loved those as well, but they cost a bit more. Still, I got them too when I could. They were labeled with names and dates in the 1950’s.

They were made by a company called Hagen-Renaker. Hagen-Renaker still makes little collectible animals, but it turns out these were an early studio line that they produced. I actually wrote the company when I was 12. Without the benefit of the internet, I don’t exactly remember how I got the address in San Dimas, California – I think I asked for the information at the one of the stores that carried them. The company was kind enough to write back with some explanation of how I had some of the earlier pieces they made.

Unfortunately, I played with these, so some limbs were broken and glued over time. Still, they are so beautiful to me – even today.

As for the animal sets, this collection grew and grew. I got them for Christmas and birthday gifts too and I loved every one. 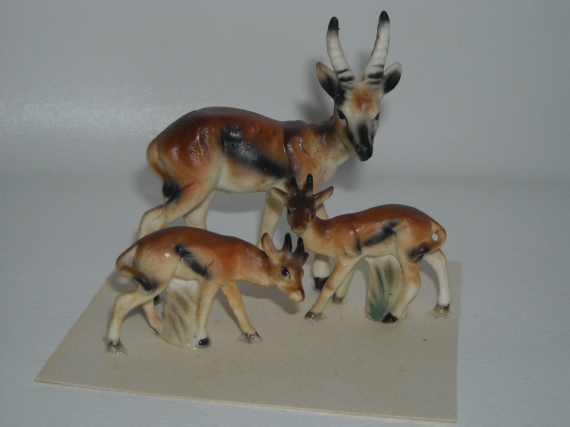 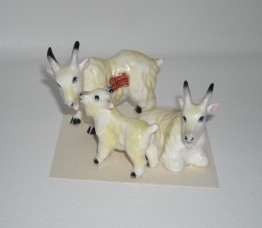 For being such a young age, this was some serious stuff. There was labeling, classifying, identifying areas of need and holes in the collection. Where does this come from? It was not being taught, so I come back to genetics. I didn’t really have a place to display the growing collection and as a wonderful surprise from my parents, I received a large curio cabinet with glass shelves and a built-in light fixture! Naturally, I started to display the sets grouping them by type – arctic animals, aquatic species, birds, etc.

I had originally saved all of the boxes they were in, but once I had the cabinet I got rid of the boxes. This turned out to be a problem later on. The curio cabinet was a wonderfully supportive gift from my parents and I am grateful for the encouragement to pursue my hobby. I still have the curio by the way. My collection was featured in a prominent place in our dining room, with the light turned on when we had visitors. Looking back, maybe my parents were collecting vicariously through me since I’ve already established they had the “collector genes”.
Eventually, fate had me cross paths with a new friend who shared my passion. Lee lived equally close to another bustling business district about a mile, or 10 blocks (in case it hasn’t become apparent, this was the preferred method of measure) from mine. She had the public library, a Woolworths (that even carried small pets) and a hardware store that carried the little bone china animals. They also had the small, newer version Hagen-Renaker creations, as well as a variety that was new to me called Josef.

Josef made little animals, birthstone angels and little character mice to name a few. You can still find all of this stuff on eBay and for me, it’s really fun to look at them. Together, Lee and I had an enormous amount of miniature animals. Being kids, we played with them and being porcelain, it’s a miracle they survived. My friend has given her collection to her daughter which I think is wonderful. Mine, a bit sadly I guess is packed in the basement.  Unwittingly, my friend Lee had opened the door to another passion which eventually bumped the bone china animals out of the curio. However, I still kept each and every one of them. 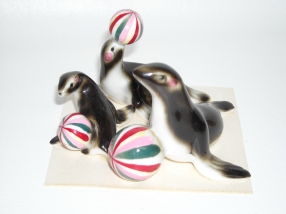 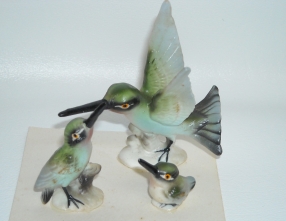 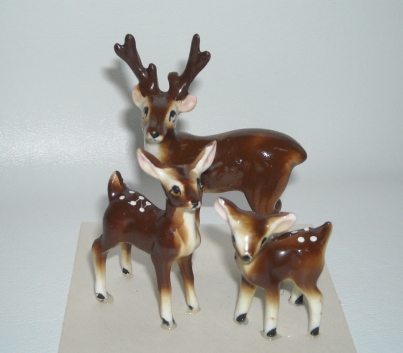 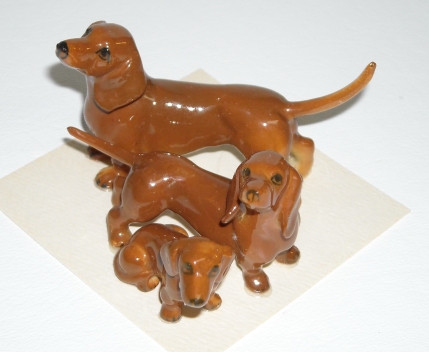 Show above are just some of the many sets of figurines.  And below the sets that represented nursery rhymes. 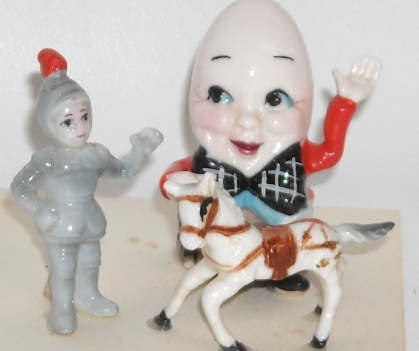 When we moved to our current home about 20 years ago, I decided to try to get a better way to store them. I glued them to cardboard squares (hopefully, removable) and packed them in a Christmas ornament box with drawers. I can go down at any time and peek at them and sometimes I still do. I feel the same excitement when I see them. 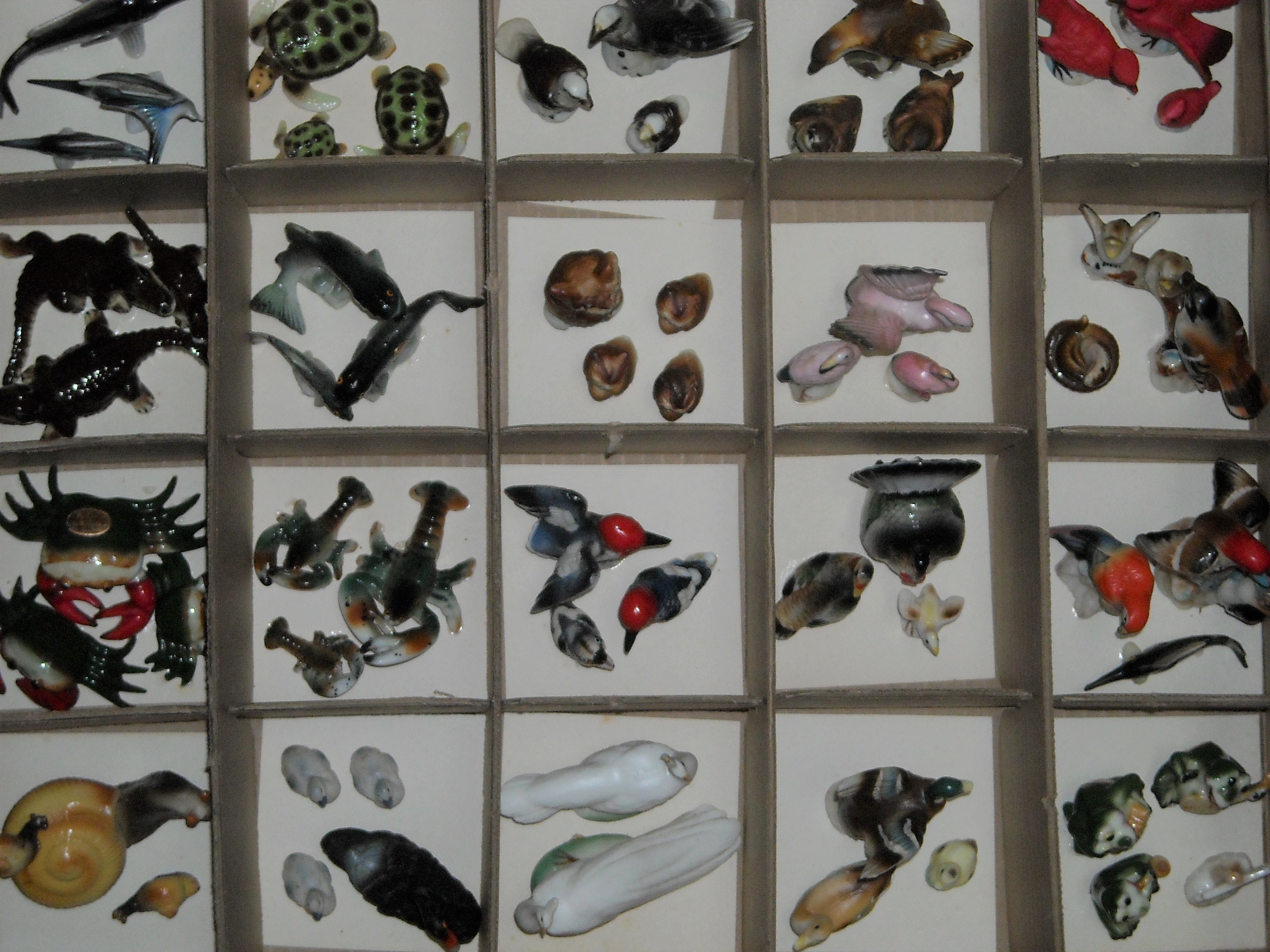 Some, not all – I can still remember where I got them.

So sometimes I wonder what to do with them…it’s hard to just get rid of something that was so meaningful so many years ago – almost fifty actually. One of the things I ponder when thinking about all of my “things” is that they tie you down. I think I’ll have more freedom (and space) if I don’t have so many things. They are a tether to a distant past, but is it bad? I would like them to end up with someone who could love them as much as I did but this isn’t possible. They were part of my growing up with many of them so carefully chosen. In conversations with people, they ask me why I care. Why worry what becomes of items once you are not around. This is one of the vexing collecting questions that I can’t answer.

For some reason I care…

2 thoughts on “A new world with new adventures…”